The Government of the Andalusian Regional Government highlights the growth and innovation of the meat sector in Almeria during her visit to Alcontar
Torregrosa checks the operation of the photovoltaic power plant for self-consumption that the company Hijos de Catalina Rodríguez Castaño has installed in Hijate.
In the first half of the year, meat exports have recorded the highest increase of the period with 207% more, up to 665,000 euros in the province.

The Government Delegate of the Andalusian Regional Government in Almeria, Maribel Sánchez Torregrosa, together with the Mayor of Alcontar, Antonio Ramón Salas, visited the meat company Hijos de Catalina Rodríguez Castaño in Hijate, which has an electrical installation for self-consumption. This type of installation forms part of the regional incentive programme for the Sustainable Energy Development of Andalusia managed by the Andalusian Energy Agency, which has resolved 322 cases in Almeria for a total of 2.3 million euros. 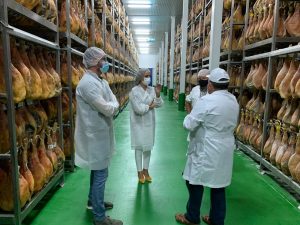 The Andalusian Government has increased the budget for solar installations, including self-consumption photovoltaic installations, by an additional 13.76 million euros, thus allocating a total of 51 million euros to promote the use of renewable solar energy in the Autonomous Community with ERDF funds under the REACT-EU Thematic Objective.
During the visit to these facilities, Torregrosa said that “Almeria is proud to have companies like this one, which has been in existence for more than 40 years as a result of family effort and which has now become an exporting company that continues to grow”. The delegate assured that “they sell their meat products to countries such as Mexico, Brazil, Germany, Andorra, France and Italy and currently they have set themselves the challenge of opening up marketing with their brand of Tío Emilio Hams in China”. In this sense, she stated that “innovative companies like this one are the basis of economic recovery, an absolute priority of the Andalusian Government after the health crisis”.
The delegate wanted to highlight “the record achieved by Almeria in exports of meat products in the first half of the year with the highest increase of the period with 207% more, up to 665,000 euros”.