Cs asks for clarification of who is dumping water from the treatment plant into the sea at Costacabana that is suitable for irrigation.

– Cazorla: “Irrigators without water for their crops, and we are throwing it into the sea”.

– The councillor regrets that “while some of us are standing by the farmers, others are getting tangled up in a grotesque dance of confusion”.

Almeria, Friday 03 September 2021. The spokesman for the Municipal Group of Ciudadanos (Cs) in the City Council of Almería, Miguel Cazorla, has urged the PP Government team to clarify the responsibility of the Consistory with respect to the water from the WWTP of El Bobar that, as confirmed by the councillor for Sustainability in the assembly of irrigators held this Thursday, is reaching the sea through the outfall of Costacabana. “It seems to us to be complete nonsense that treated water that could be used for irrigation is being discharged into the sea, especially when we have learned of the exorbitant price that the Town Hall intends to charge irrigators for desalinated water; water which, as we already know from technical reports from the University of Almeria, comes in part (around 25%) from the Bajo Andarax aquifer, which is overexploited,” said Cazorla after participating in the meeting of irrigators held at the CASI facilities.

During the meeting, Cazorla took the floor to warn that these discharges of water from the treatment plant “could represent a presumed environmental crime”. “The purified water must be fully exploited, and the political responsibilities must be purified as much as the water,” added the orange councillor.

The councillor referred to the words of Margarita Cobos (PP), according to which, during the month of August, more than 75,000 cubic metres of treated water were discharged into the sea. “She went so far as to say that out of 9.3 cubic hectometres of treated water, only 3.5 cubic hectometres are used for irrigation, a total nonsense. The farmers have no water to irrigate, and we are throwing it into the sea, all with the knowledge of the PP government team”, he criticised, asking “who authorises this water to be thrown into the sea, and why has no action been taken since the first minute to prevent it”. 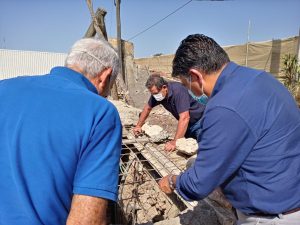 The PP wants to charge them 0.7754 euros per cubic metre; a figure that will surely exceed one euro per cubic metre – according to the irrigators, it will reach 1.92 euros/m3 – when the additional costs are added,” warned the Liberal councillor.

For Miguel Cazorla, “it makes no sense, because with this price, most of the crops in the Almeria countryside are not profitable”. Furthermore, he denounced the contradiction that “on the one hand, the government team itself admits that the price of desalinated water is reduced when the number of basins in operation is increased, but on the other hand, with the agreement that they intend to make the irrigators sign, this price is increased by seven cents by putting one more basin into operation, which has neither sense nor sense”, he stated in reference to the agreement of the Local Government Board of 4 July 2021.