They come from a nest located on the Granatilla beach in Mojácar and will remain in the town of Algeciras until the summer of 2022.

Since this week, the twenty loggerhead turtles that hatched at the end of August in Mojácar have been at the Centro de Gestión del Medio Marino Andaluz (CEGMA). Last July, a nest of loggerhead turtles was found on the Granatilla beach, in this town in the Levante region of Almeria. Once it was confirmed and an approximate hatching date established, the area was marked and an operation coordinated by the Regional Ministry of Agriculture, Livestock, Fisheries and the Environment was activated, in which personnel from the Regional Ministry and the AMAYA Agency, EBD-CSIC, Environmental Agents, Local Police, Emergency 112 and the Serbal Association, as well as volunteers, among others, took part.

After the birth of around twe 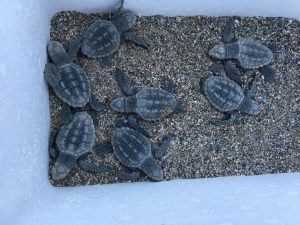 nty hatchlings of this species, and once the appropriate care had been provided by the veterinary staff of CEGMA del Estrecho from the location of the nest until the emergencies were completed, they were given a health check, biometrics, weights and individual identification of each specimen and then transferred to the CEGMA facilities, where the specimens will remain breeding until next summer once they have reached a greater weight and strength, thus increasing their chances of survival in the sea.

At present, young from a nest located in Fuengirola in the summer of 2020 are being kept at CEGMA in the Strait of Gibraltar, and their release is scheduled for this September. On other occasions, the Junta de Andalucía has also collaborated with other Autonomous Communities, such as the Community of Valencia, in the breeding of loggerhead turtle hatchlings.

This is a common practice as a high level of specialisation is required to carry out this work and there are few teams of professionals with accredited experience. The final objective is to carry out actions to protect the nesting events of this turtle species in the western Mediterranean. These events are exceptional for the moment, but it is hoped that in the future citizens will be able to enjoy them on a regular basis on our Andalusian beaches.