In July, the province recorded a growth in hotel stays that doubles the figure for 2020 and is above the Andalusian and Spanish average.
The territorial delegate visited Vélez Rubio and Vélez Blanco, where he discussed with their respective mayors the tourism projects with which Juan Marín’s Regional Ministry is collaborating. 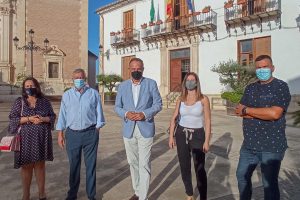 The territorial delegate of Tourism of the Junta de Andalucía in Almería, Vicente García Egea, has visited this morning the municipalities of Vélez Rubio and Vélez Blanco, where he has held meetings with their councillors, Miguel Martínez-Carlón Manchón and Pedro Luis Díaz Gil, respectively.

García Egea has taken advantage of these meetings to recall “the success of occupation this summer of the destination Almería in general and the region of Vélez in particular. We are one of the provinces with the highest increase in hotel stays. In the month of July they have been more than double than in 2020 (+126%), with a higher growth than the average recorded in Andalusia and in our country, where national tourism has had a special role”.

Thus, he stated that municipalities such as Vélez Rubio and Vélez Blanco have also experienced this increase, “we are selling security, nature, open spaces and these towns represent it very well. In the region there are some 400 accommodation places that have been practically full these months. This safe and slow tourism has had a great acceptance”.

In this sense, he stressed that “since the beginning of the crisis, the Regional Ministry led by Juan Marín has been working to transmit the image of the safe destination that we are, something that we have tried to assert, among other things, with tools such as the ‘Andalucía Segura’ label, which we made available to the sector free of charge”.

“Tourism is a strategic sector and for this reason we are firmly committed to both entrepreneurs and municipalities so that they can develop projects that allow them to strengthen and complement their offerings. It is a key driver for the generation of employment and wealth, which also helps us to fix the population in the territory,” he said.
The territorial responsible has taken advantage of both visits to discuss with the mayors the projects that the municipalities have presented to the various lines of aid that Tourism has activated this year for the localities and that are linked to the preservation of heritage and digitisation. He also emphasised the development of initiatives that the localities have in place, such as hiking trails, which promote the articulation of the region with neighbouring territories, as well as the sustainable development plans of the tourist municipalities. 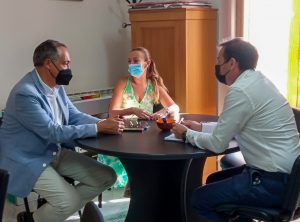 he delegate also thanked the towns for the work they are doing to promote tourism and the different projects they are developing “to continue growing in a sustainable way”.

For his part, the mayor of Vélez Rubio, Miguel Martínez-Carlón Manchón, thanked “the interest in the town and our projects on the part of the new Government of the Junta. Vélez Rubio was the great unknown and is experiencing a great boom in tourism. People are discovering us and feel very much at home.

As for the councillor of Vélez Blanco, Pedro Luis Díaz Gil, he stressed that the lines of aid that the Regional Ministry makes available to the municipalities “will allow Vélez Blanco to maintain the economic engine that is tourism. We are committed to this sector in which we are well positioned. It is a sustainable way for our neighbours to earn a living and protect our heritage.