– When the perpetrator was surprised, he tried to escape by climbing up the terraces of the adjoining houses until he was caught by the officers.

– The detainee had the help of two other people to carry out the robberies, who managed to escape in a vehicle when they noticed the police presence.

The Guardia Civil of Almeria as a result of the action carried out last Sunday 29 August, has arrested a young man of 20 years, as the alleged perpetrator of a crime of attempted burglary perpetrated in two houses in the town of Nijar (Almeria). The young man was caught red-handed and tried to flee by climbing up the terraces of the adjoining houses until he was later caught by the agents. A second perpetrator of the robberies fled in a vehicle that was parked and prepared with a driver to make his getaway. 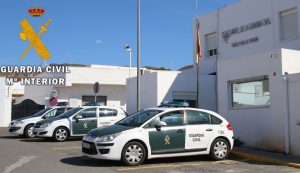 This arrest is the result of the activities carried out by the Guardia Civil in the area of public safety against crimes against patrimony, offering a rapid response to them, counting on the collaboration of the public on this occasion.

In the first action, the agents received a tip-off at around one o’clock in the morning, via a telephone call to the official offices, that a neighbour in the Almeria municipality of Nijar had seen an individual in the courtyard of the house next to his own trying to access the next terrace through the wall that separates them.

When the agents arrived on the scene, they inspected the house and observed that there was a box in the courtyard located in the dividing wall that facilitated access to the rest of the houses. Due to these facts, the agents set up a surveillance device and carried out a sweep of the adjacent streets to locate the alleged perpetrator.

The second action began at two o’clock in the morning when the agents received another burglary report in the same area of houses. A neighbour alerted that he was hearing noises and loud knocking in the adjoining house, which is usually uninhabited. Immediately, the officers, who were close to the house, approached on foot and observed a person who was on the terrace and who, on being surprised, fled across the rooftops of the housing complex, until he was caught by the officers when he tried to jump off and escape on the run.

During the arrest, the Guardia Civil officers observed that another person was climbing down a railing and when he noticed the police presence, he started climbing again until he managed to escape in a vehicle that was parked and prepared with a driver to make his getaway.

In a first inspection of the houses, the agents verified that the perpetrators had caused damage to the access doors, despite the fact that they did not manage to get inside because they had been caught in the act by the agents. The tools used in the robbery were seized at the scene and all possible evidence was collected for the investigation, which remains open without ruling out further arrests.

Finally, as a result of this action, one of the perpetrators was arrested for the offence of burglary, and together with the investigative proceedings, they were handed over to the Examining Magistrate’s Court in Almería.