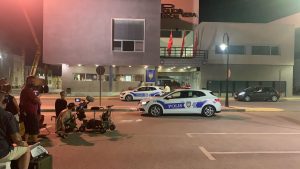 The facilities of the Local Police Headquarters of Vera and the exterior of the premises have become during these days the filming set of the international television series “No Return” composed of four chapters and produced by the British production company “Red Production Company” and the Spanish “Bambú Producciones”.
In this way, the more than 60 vehicles that make up the production have used as a base camp, from last Saturday until the end of filming today, the side car park of the Ciudad de Vera auditorium, attached to the premises of the local police headquarters in the town. The 130 people who make up the filming team, including actors and technical staff, have used the municipal auditorium as a support space and bathroom area, as well as using the square outside the venue to set up the team’s catering area.
The filming, which has the support and the relevant municipal permits, has required intermittent traffic cuts of a maximum of 5 minutes in the vicinity of the central car park of the police headquarters, “so the inconvenience to citizens has been minimal”, as indicated by the First Deputy Mayor of the Town, Alfonso García, who has valued very positively that “international production companies choose our municipality for this type of filming, for our climate and our light, for the beauty of our town and for the facilities that we provide from the Consistory for the processing of permits, which speeds up the decision making of these large production companies, which generate wealth in our municipality. There have been 130 people staying in Vera for several days, with all that this entails”.