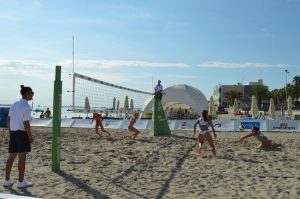 San Javier will host this weekend the fifth stop of the Madison Beach Volleyball Tour 2021, which brings together on the Costa Calida to 13 female couples and 15 male couples of the highest national and international level to play three days of exciting competition.
The Madison Beach Volleyball Tour has landed in San Javier with box days of pure sporting spectacle and leisure. The event began yesterday Thursday with the official training of the participating teams, as a prelude to the competition. This Friday the uninterrupted marathon of beach volleyball has started, with the first and second rounds of the qualifying round in the morning and the first rounds of the group stage of the main draw this afternoon, from 17:00 to 20:30.

On Saturday, the second and third rounds of the group stage will be played from 9:00 h. and, from 17:00 h., the quarter finals.

The competition will finish on Sunday with the following morning schedule: men’s and women’s semi-finals from 10:00 to 14:00. The finishing touch to the best days of beach volleyball will be the women’s final at 18:00 and the men’s final at 19:00.