He later sold the stolen batteries to a company that resold them to private individuals for well below the market price. 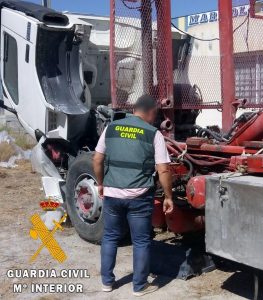 Agents of the Guardia Civil of Almeria arrested a person for robbery with force and investigated two more people for the sale of stolen goods to individuals in Albox.

This recent action is the result of the ongoing work carried out by the Guardia Civil in the province for the prevention and investigation of crimes against property.

The Guardia Civil officers detected an increase in the thefts of batteries from lorries in Albox, Tijola, Macael and Arboleas, initiating an investigation in which they analysed the information on the different facts.

From the first investigations it is clear that the perpetrator always travels in his private vehicle, following the same modus operandi, consisting of approaching the vehicle to the lorry, using the vehicle’s fog light to illuminate the area, forcing the place where the batteries are stored, loading them into the vehicle and leaving the area as unnoticed as possible, using about ten minutes for each theft.

The agents determined that the total value of the stolen batteries exceeded 5000 euros, designing a device for the identification and location of the perpetrator. 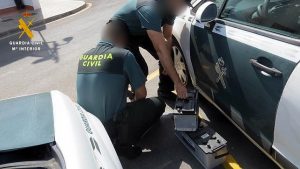 After examining the clues and evidence collected during the visual inspections of the trucks and supported by technological means, the agents were able to positively identify the vehicle and later the perpetrator of the thefts.
After efforts to locate him, the results were positive and he admitted to the agents that he was the perpetrator of the battery thefts under investigation and was therefore arrested.

In addition, the agents found that the detainee had a previous record for similar offences.

In the final phase of the operation, the agents tracked the stolen items, which led them to a company in the area that bought the batteries and resold them for much less than the market value, so they investigated two people responsible for the company for the crime of receiving.