Ecologistas en Acción finds it incomprehensible that the Ministry for Ecological Transition and the Demographic Challenge has not yet declared coastal lagoons as the first endangered habitat in the Spanish Catalogue of Endangered Habitats. 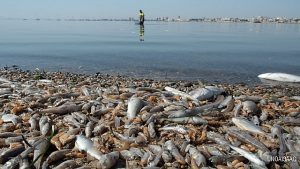 The Mar Menor is the largest representative of this habitat, with 40% of the total surface area of the habitat in Spain.
The environmental organisation has made this request to the Director General of Biodiversity, Forests and Desertification, the Secretary of State for the Environment and the Third Vice-President of the Government and Minister for Ecological Transition and Demographic Challenge during her last visit to the Mar Menor.
As specified in Article 24 of Law 42/2007, the Spanish Catalogue of Habitats in Danger of Disappearing must include habitats in danger of disappearing, whose conservation or, where appropriate, restoration requires specific protection and conservation measures. Despite the fact that 14 years have passed since its creation, this catalogue has not been implemented.
In the Mar Menor, the environmental collapse that has caused an ecological imbalance in its habitat due to the serious process of eutrophication of its waters, the overexploitation of water resources in Doñana, which compromises the conservation status of habitats and species that depend on water, is already very evident, and the environmental crisis that persists in the coastal lagoon of the Albufera de Valencia, which, due to the deficient and insufficient quality of the water supply, is in a hyper-eutrophic state that prevents the wetland’s biodiversity from recovering.