The Almerian photographer Carlos Pérez Siquier passed away on Monday 13 September at the age of 90. 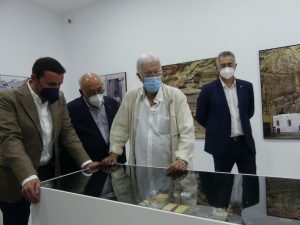 Consternation in the world of culture and in the region of Almanzora where exactly a week ago, the artist attended the official inauguration of the building that bears his name in the City of Culture of Olula del Río and houses his work, along with among other things, cameras and instruments used by the photographer in his long career.

This very fresh memory has caused surprise at the unfortunate news, since it was the artist himself who addressed the audience with a brief message, as he defined himself as a person “more a person of image than of words, thank you for your praise and I hope you enjoy my work and this exceptional museum that houses it”.

The president of the Provincial Council, Javier Aureliano García, who was present at the event held on 6 September in Olula del Río, was one of the first to react on his Facebook wall:

The Pérez Siquier Centre opened to the public in 2017, culminating in the extension that was inaugurated on the 6th. The Centre contains the most significant work of the photographer from Almería, from different styles and periods. The new building already has two rooms with content. One of them shows the work of Pérez Siquier produced between 2001 and 2021, an exhibition that is more than 60% unpublished.