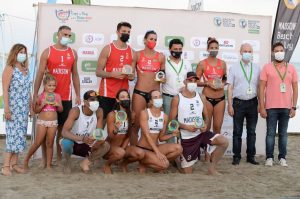 The Costa Cálida International Open said goodbye to San Javier yesterday after three days of the best beach volleyball enjoyed by thousands of people live on the Barnuevo beach and also through television broadcasts of the finals played on Sunday afternoon. The mayor of San Javier, José Miguel Luengo, the director of the Institute of Tourism of the Region of Murcia, Juan Francisco Martínez, the president of the Royal Spanish Volleyball Federation, Agustín Martín and the director of External Relations of Madison, Teresa Cetulio delivered yesterday the awards of the tournament, fifth of the Madison Beach Volleyball Tour, to the couple formed by Ángela Lobato and Sofía González and the one formed by Hernán Tovar and Rolando Hernández in the feminine and masculine pictures respectively. The sand of the beach Barnuevo has been since last Friday the scene of this prestigious beach volleyball event in which 15 male and 13 female pairs composed of national and international players have participated.