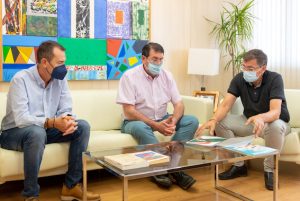 The PSOE of Almeria has already begun preparations for its 14th Provincial Congress, to be held before the end of the year. Among the issues on which work has already begun is the Ponencia Marco, a document that will lay the foundations for the political agenda of the socialists in Almeria in the short and medium term.

At the last meeting of the Provincial Executive Committee, the Secretary General of the Socialists in Almeria, José Luis Sánchez Teruel, raised the need to start drawing up this document. To this end, he has appointed Martín Gerez and Juan Carlos Pérez Navas as coordinators of the drafting team, made up of the mayor of Viator, Manuel Jesús Flores Malpica, the mayoress of Níjar, Esperanza Pérez, the mayor of Serón and socialist spokesperson in the Provincial Council, Juan Antonio Lorenzo, and the municipal spokespersons in the town councils of Adra and Roquetas de Mar, Teresa Piqueras and Manolo García, respectively.

“We want this document to be the basis, for the coming years, of the agenda of the PSOE of Almeria, which must have as its pillars the economic recovery, the creation of quality employment and the strengthening of public services, after actively listening to the Almerian society, as is being done by the Secretary General of the PSOE of Andalusia, Juan Espadas, throughout Andalusia,” said Sánchez Teruel.

The secretary general of the provincial PSOE has stressed that the framework paper that the leadership will transfer to the militancy for analysis and for the contribution of as many issues as they consider has as an unavoidable principle the commitment made by the Government of Pedro Sánchez with the Recovery, Transformation and Resilience Plan to channel the funds allocated by Europe to repair the damage caused by the crisis of covid-19. “These funds will allow the major investments that Almeria needs to be carried out and, for this, we will demand diligence in the management, by the Andalusian Government, of many of these funds that will be transferred to our community,” he said.

With regard to the specific issues of Almeria, the framework paper will devote special attention to agriculture, focusing on innovation, guaranteeing water resources through water transfers, the expansion of existing desalination plants and the construction of new infrastructure, and a new CAP that includes aid from the first pillar for fruit and vegetables. The Secretary General of the PSOE of Almeria has assured that “these issues are presented as the best guarantees to give a definitive boost and security to the main pillar of Almeria’s economy”. In the same way, the PSOE of Almeria will stand by the women who work in the warehouses, “a group that is essential to bring out the products that thousands of lorries transport to Europe on a daily basis and who must be guaranteed decent working conditions and salaries”.

On the other hand, Sánchez Teruel considers that “Almeria must once again become a benchmark in renewable energies, since we have all the natural resources to do so”, which is why the PSOE of Almeria will move forward along the same lines as the Spanish Government, so as to promote their promotion and their use to reduce the cost of energy consumed by homes and businesses.

In the same way, the socialist leadership points out that “a future of progress and opportunities is opening up” for Almeria with the AVE works, “an infrastructure that the Government of Pedro Sánchez is firmly committed to and which will give a definitive boost to the province”.

The demographic challenge, in all its aspects, will also be present in the paper that will be taken to the Provincial Congress of the PSOE of Almería, in the same way as the need to continue strengthening the municipalities in terms of security. For this reason, the paper will include the need to continue to consider the construction of a National Police station in Roquetas de Mar and new facilities in the capital. In addition, “it is considered necessary to reinforce the presence of the Guardia Civil in Níjar, as the fourth largest town in the province and the second largest municipality in Spain, and a large Guardia Civil barracks in the Poniente, to provide security for the plastic sea, which has an extraordinary economic value,” concluded Sánchez Teruel.