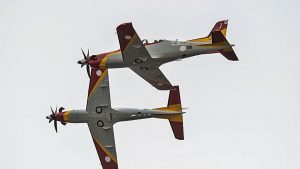 The Air Force is modernising with the arrival of the new Pilatus (PC-21) aircraft at the General Air Academy in San Javier. This Tuesday, the aviators witnessed the milestone that will represent an evolutionary step in the training of future pilots with more modern and safer aircraft, moving from the current fleet of C-101, with an analogue system, to make the leap to a new digital era in Spanish military aviation.

The two aircraft departed from the facilities of Pilatus Aircraft, the company in charge of their manufacture in Switzerland, where 8 pilots have been training this summer. Under the watchful eye of dozens of Air Force aviators, the planes landed at midday while the pilots and instructors received a great applause from their colleagues.

The PC-21s have a 1,600-horsepower turboprop engine, capable of reaching 700 kilometres per hour and a maximum altitude of 8 kilometres. With a range of 1,300 kilometres, they are capable of travelling from San Javier to any point in Spain without refuelling.

The C-101s arrived at the AGA more than four decades ago, so a renewal of equipment was necessary. However, the Academy maintains that the aircraft have not been replaced “because they are old”, but to improve the quality of teaching. San Javier is the school where the military pilots of the entire Spanish Air Force are trained until now, with the C-101.

From the next course, the students will leave aside the paper and theoretical teaching, necessary to get to the controls of the old aircraft, and will pass to a “continuous evaluation” through computers and flight simulators that, “will allow the students to be instructed virtually so that they feel they are in the plane from the first moment”, indicated Lieutenant Colonel Ildefonso Martínez, Chief of Air Forces.

In this way, pilots will arrive at the PC-21 more prepared and will need “far fewer flight hours”, thus reducing training costs. With the C-101 it is not possible to simulate flight outside the aircraft, as the analogue system is made up of clocks and indicators, while the Pilatus operates through 5 computerised screens.

In addition to the advantages in terms of training and cost reduction, another strength of the new Air Force training aircraft is safety. The Pilatus has GPS, detects the position of other aircraft in the vicinity and also detects if other Pilatus are nearby. It also has a virtual air-to-ground radar that can identify targets on the ground. In addition, flight data is entered before take-off and it is able to detect if the aircraft is too close to the ground; in that case, thanks to voice control, it warns pilots to regain their position. This is intended to prevent accidents such as those that cost the lives of four AGA pilots in 2019 and 2020.

During this course, the instructors will prepare to receive the rest of the fleet, consisting of another 24 aircraft, in June 2022. It will be at that time when the Pilatus flight simulators and computers will arrive in San Javier, just in time after the refurbishment of the Air Force building, which is currently under construction and will be ready before September 2022, according to the Academy.

Even so, it should be noted that the pilots of the Eagle Patrol will not switch to the PC-21 and will continue flying their legendary C-101s by decision of the Air Force, as “they are Spanish-made aircraft and a hallmark of identity for the patrol”, according to sources at the General Air Academy.