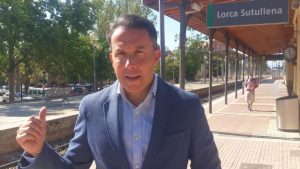 The leader of Lorca’s PP, who will present a motion at the next full council meeting, has stated that “there is nothing to justify the closure of the line in just two weeks, because the first work on the tracks will not begin for another nine months”. In the next few days, Lorca will host a summit of PP representatives from all the town councils affected by the line closure. The president of the Popular Party of Lorca, Fulgencio Gil, will request the support of all municipal political groups in the next plenary session of the City Council to urge the Government of Spain to desist from its intention to close the railway line between Lorca and Murcia on 1 October, given that work on the tracks would not begin for approximately nine months, as planned by the Central Government of Pedro Sanchez. We have to ensure that the line between Águilas, Lorca and Murcia remains open.

We are talking about a demand that reflects the widespread clamour of both the people of Lorca and the citizens of all the municipalities served by this line. It is unacceptable that the central government is determined to cut the service on 1 October, because there is nothing to justify the closure of this railway line, absolutely nothing, as we could save almost the entire academic year, a time that they have to take advantage of to correct this chaos and make the maintenance of the service compatible with the works, which was what was planned from the outset.