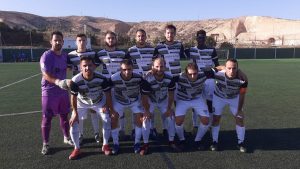 The match will be against La Cañada, a match in which the new coach David Cartagena will face a team he has been linked to for years.

“The draw has been capricious and we have to play a derby against La Cañada, the first of the nineteen teams with which we are going to fight the objective of permanence”, said the captain and president of Cantoria 2017, Ricardo Mora, to La Comarca Noticias.

A year in which Cantoria starts with the same enthusiasm and supported by a fan base that makes itself felt in every home game. It is the only regional team in the division, which means that fans from all over the region come to watch.

This year, players such as Carlos Teruel, Fkillo, Guille, Carre and Ginés have left the team for various reasons. At the same time, players such as Reche, Mame, Capel and Joaquín, to name but a few of the new names that the local fans will have to get used to, have joined the team.

The match is at 12 noon with seating limited to around three hundred people.