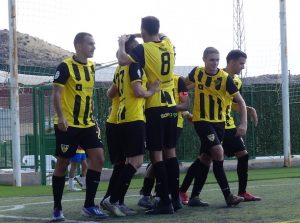 Cantoria 2017 won comfortably on their home debut, beating La Cañada by 4 goals to 1 in the first matchday of the Andalusian Division of Honour, Group 2.

In front of around  300 fans at the Estadio Municipal Los Olivos on Sunday, the team coached by David Cartagena quickly got the game underway, after a free kick from outside the area by Agus went in off Fran’s right-hand post. 1-0 before the 4th minute in the home side’s first attack and the best sensations.

The 2-0 for the Aurinegros came in the 22nd minute when Reche, from the centre circle, took advantage of the rival goalkeeper’s overtaking and scored one of those goals that, if scored by a media player, would be shown on television all over the world. Reche, who came from Totana, set the pace of the first half from the midfield, not only for the goal, but also for being in charge of maintaining the tactical order of the team.

The new additions have enabled Cantoria to make a leap in quality and now the creation does not only fall on Ricardo’s shoulders. The arrival of Abdou Dop as a more advanced pivot allows the team to take advantage of the verticality and pressure up front. The home-grown players have learnt their lesson well and Cantoria move their towers at every set-piece to gain the advantage. A team that in this first match seems to have found a balance that will allow them to compete to achieve their first objective, which is permanence.

In the `10 of the second half, it was another of the new players who scored the 3-0; Capel headed it into the back of the net after a corner kick by Ricardo. In the 28th minute, the defender won again in the box this time after a throw-in from Darius to make it 4-0.

Joseca scored for La Cañada in the 34th minute, in one of the few dangerous chances for the visitors.

4-1 was the final score, although the best thing was the sensations. Those in attendance went home with the feeling that what they saw looked good. In addition to the lack of goals, the second lines passed their first test with flying colours. The defence had no major problems and in Joseca’s goal, it was to the striker’s credit that he first picked up the ball and scissored it past Alberto’s goalkeeper. The midfielders have more of the ball at their feet and up front they have the ability to score the goals they missed so much last season.