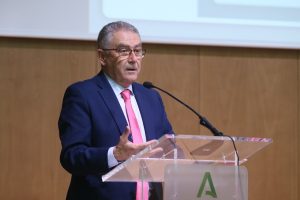 The General Plan for Sustainable Tourism in Andalusia META 2027, promoted by the Regional Ministry led by Juan Marín, is a “historic opportunity” to “create a before and after” in the sector in Almería, and “fits perfectly with the reality” of the province and, above all, “with its strengths”.

This was stated by the Secretary General for Tourism, Manuel Muñoz, and the territorial delegate in Almería, Vicente García, during the presentation of the plan to businessmen and institutions in the province, which was held in the auditorium of the Francisco Villaespesa Public Library.

Muñoz indicated that the objective is to “be clear” that in order to maintain Andalusia as “one of the most important tourist destinations in Spain and the world” it is necessary to have “a new model of tourism management” that prioritises “not only environmental sustainability, which we have always worked for, but also social and economic sustainability”.

Muñoz also warned that tourism “has ceased to be an established sector” to become “something more dynamic, with the whole of society involved”, which is why he highlighted the high level of participation in the META Plan, with provincial conferences which, in the case of Almería, were attended by 20 experts. In the rest of the provinces there were 167 and, in total, around 300 agents took part.

For his part, García Egea stressed that Almería “meets the perfect conditions” to “adapt to this road map” drawn up by Juan Marín’s Regional Ministry, given its “diversity”. “The natural wealth of the province is perfectly suited to sustainable tourism,” he stressed.

Thus, he remarked how “all the programmes and lines” contained in the META Plan are “in line with the realities and strengths” of the province. “Now we have a historic opportunity to make this potential not just a dream, but a reality that can be embodied in the framework of this META Plan”, said the delegate, while he encouraged us to “take advantage of this roadmap without complexes to achieve what we must have and not just think about what we could have”.

In this line, the delegate highlighted the budget allocation that reaches 717 million euros with a 2027 horizon, of which 546 million euros are provided by the Andalusian Government and the rest comes from European funds.

Before an audience made up of tourism entrepreneurs and representatives of the administration and entities with the Port Authority, García Egea alluded to the public-private partnership as a “push” for the implementation of the plan. “The businessmen are essential for its success, as it is not only the impulse of all the administrations that is enough”, he said, adding that the participation of the “main agents of the sector is the encouragement” of the initiative of the Regional Ministry.

Finally, the president of Asempal, José Cano, welcomed the META plan “because it looks to the future through an intense process of participation”, as “it is endowed with its own resources and European funds” and, in his opinion, the commitment of all the actors in the sector and the promotion of public-private collaboration is a “success”. Cano concluded that this initiative of Juan Marín’s Regional Ministry represents “a great opportunity to reactivate the sector” with a “strategy for the future” which, in this case, will allow Almería “to become a reference point based on its great tourist strengths”.