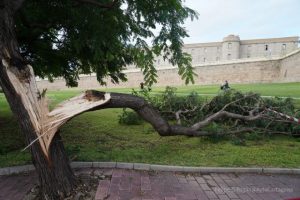 The work carried out by municipal officials is gradually bringing Cartagena back to normal. Currently, most of the streets and roads in the municipality are already open to traffic, with the exception of the Mina road between El Albujón and Molinos Marfagones.

The Councillor for Public Safety, Juan Pedro Torralba, has highlighted the work of the workers of the City of Cartagena, especially Fire and Local Police, in the care of citizens.

The work consisted mainly of rescuing citizens whose vehicles had been stuck by water in the Camino del Sifón and the roundabout at the access to the Virgen de la Caridad neighbourhood, at the junction of the Ronda Ciudad de La Unión with the Avenida Ciudad de Murcia, known as the Las Seiscientas roundabout.

“In addition, firefighters are carrying out drainage work in several basements and garages in the municipality of Cartagena as Los Dolores, Barriada Hispanoamerica, Calle Angel Bruna, Santa Lucia, Los Barreros, or the Plaza Jose Maria Artes,” said the councilman. 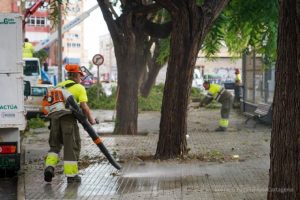 Among the damage caused by the wind also highlights the fall of a wall 1.40 meters high in the Plaza Reyes Católicos de Vista Alegre, as well as nine trees that have collapsed or have suffered damage as a result of the strong wind, in Ronda Ciudad de La Union, Barriada San Ginés, Los Barreros, Cuatro Santos and Cuesta del Batel.

“Infrastructure technicians are also taking care of eliminating the puddles that have occurred in the Fair, next to the old Carthaginians and Romans camp, so that, if all goes well, it can open this afternoon with total normality,” explained Torralba.