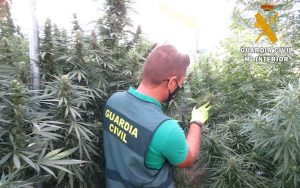 In the operation called “Shanty charcon”, Guardia Civil of Almeria has arrested two people in Arboleas and investigated another as perpetrators of a crime against public health for the cultivation of drugs (marijuana).

This action is part of the unceasing work carried out by the Guardia Civil of Almeria in the fight against drug trafficking, cultivation or processing in the province.

This operation is the result of police investigations and operational controls, together with the analysis of information and basic intelligence, as well as information and data received by collaborators regarding criminal acts related to crimes against public health and in particular the cultivation and processing of drugs in the province of Almeria.

Following the continuous acquisition of information about criminal organisations related to the trafficking of illicit substances. Guardia Civil of Almeria has knowledge of the existence of a farmhouse located in the El Charcón area of the town of Arboleas, which houses a possible cultivation of marijuana (Cannabis Sativa).

Guardia Civil organised various sporadic surveillance operations around the farmhouse, with positive results, observing how, due to the size of the plants, they protruded from the top of the walls. They also identified how a person, a resident of the same municipality and owner of the farmhouse, approached the place and entered it, revealing the plantation when he opened the door.

As a result of the operation “Shanty Charcon”, the Guardia Civil of Almeria seized 52 large marijuana plants (cannabis Sativa), in an advanced state of flowering, containing a large quantity of buds. Two people were arrested and another was investigated as perpetrators of a crime against public health.

Both the proceedings and the detainees and the seized drugs are placed at the disposal of the Court of First Instance and Instruction No. 2 of the town of Huercal-Overa.