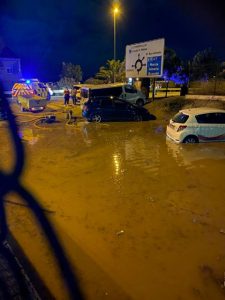 The Councillor for Emergencies, Isabel Casalduero, explained that “most of the warnings received have been related to water drainage, obstacles in the way of manhole covers, flooding on terraces of houses and streets due to lack of drainage capacity and blockages in drains and sewers collapsed by the intensity of the waterspout.

The Councillor for Emergencies of Lorca City Council, Isabel Casalduero, reported that “up to 23:00 hours more than 50 warnings have been received related to the downpour of water that has fallen on Lorca”.

The Councillor for Emergencies has indicated that “most of these warnings have been related to water drainage, obstacles in the way of manhole covers, flooding on terraces of houses and streets due to lack of drainage capacity and blockages in drains and sewers collapsed by the intensity of the waterspout.

Isabel Casalduero added that “some vehicles that had got stuck in the water had to be rescued, fortunately all of them without occupants”.

Casalduero Jódar pointed out that “there has been flooding in the underground next to the train station, as well as another incident that has taken place at the level crossing at Alameda de Cervantes in which firemen and ADIF workers have had to intervene”. 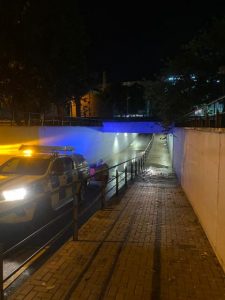 The councillor for Emergencies explained that “we have also had evidence of flooding in some specific areas of the Águilas road or in the hamlet of La Hoya”.

The councillor referred to the evacuation that has taken place both in the Huerto de la Rueda Fairgrounds and in the old Convent of La Merced, areas where the activities organised for the Lorca Fair were taking place, and which in both cases have been carried out normally.

“In the Huerto de la Rueda, where people were enjoying the fairground rides, there were no significant incidents and they have been leaving the site. Meanwhile, in La Merced we have proceeded to the eviction of all those people who attended the Gala del Mayor, an eviction that has been fully coordinated with the Security Forces, Local Police, National Police, as well as Emergency and Civil Protection and Red Cross, and ambulances DYA, due to the advanced age of many of the attendees and has proceeded to the transfer of people who have so needed both to the residence from which they came and to their own homes”.

Isabel Casalduero also reported that “after the evacuation of La Merced a lady had to be taken to the Rafael Méndez hospital after having suffered a fall”.