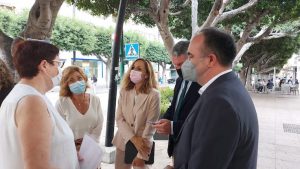 The delegate of the Government of Andalusia in Almeria, Maribel Sánchez Torregrosa, participated today with the Mayor of Almeria, Ramón Fernández-Pacheco, and the territorial delegates Juan de la Cruz Belmonte and Rafael Pasamontes, in the traditional collection of the Friends of Alzheimer’s Association in favour of the fight against this disease, coinciding with its World Day, which is commemorated on Tuesday 21 September.

Torregrosa said that today is a day when “we come together to show our support for patients, families and carers of people suffering from Alzheimer’s, a disease that is increasingly present in the 21st century and in which we want to highlight the work carried out by organisations such as the Friends of Alzheimer’s Association, which is taking to the streets today to raise funds”.

In her speech to the media, the delegate stressed that the Andalusian Regional Government is drawing up the new Andalusian Plan for Alzheimer’s and other dementias, within a framework of integrated care centred on the person, which guarantees continuity of care. As she explained, the new Plan is expected to come into force at the beginning of next year, and will focus on raising awareness, awareness and support for carers and families, the promotion of biomedical, social and health research, etc.

The delegate also made special emphasis on the fact that “despite the social and health improvements achieved in recent decades, which have allowed us to achieve a long life expectancy, we must bear in mind that Alzheimer’s not only affects the elderly but also, in up to 10% of cases, people under the age of 65.

For her part, the president of the Friends of Alzheimer’s Association, Esther Fernández, explained that since 1992 they have been dedicated to offering attention and care to Alzheimer’s sufferers and their families, while stressing the importance of “research continuing to advance in order to achieve early detection and more resources”.

Fernández also pointed out that there are currently estimated to be more than 9,400 people with this neurodegenerative disease in the province of Almería, the majority of whom are women.

The Mayor of the capital stressed that “from the City Council we want to accompany, publicise and, above all, support the association and the families. You can count on your City Council”, said the mayor, who highlighted the “commendable work” carried out by the José Bueno Complex, which he visited just a few days ago, to improve the quality of life of Alzheimer’s patients and to facilitate the day-to-day lives of their families.