– The boat made landfall at El Corral beach in the municipality of Carboneras (Almería).

– The agents helped the people who were travelling without safety measures and were transferred to the CATE in Almería. 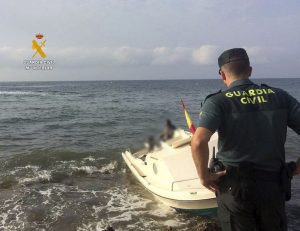 On the afternoon of the 17th, members of the Guardia Civil of Almeria arrested two people skippering a boat with 14 people on board for a crime of encouraging illegal immigration, a boat that made landfall on the beach of “El Corral”, in the municipality of Carboneras (Almeria).

The Guardia Civil agents clearly and permanently spotted the skipper of the boat who, after making landfall, disembarked the people on board, who were making the crossing without wearing any type of life jacket or safety equipment.

Once the first attention was given to the people on the beach and after collecting the first evidence of the investigation, the agents proceeded to arrest one more person, once they determined that he was responsible for the purchase of the boat and acted as the second skipper during the crossing.

The boat, which is 5 metres long, lacks safety or rescue equipment and signalling in the event of sinking or an accident, and the load is dangerously oversized.

After being helped, the 14 people on board were transferred to the CATE in Almeria, the detainees were placed at the disposal of the Court of Instruction 4 in Vera together with the proceedings which decreed their imprisonment.