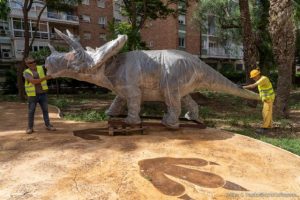 The dinosaurs, which are the main attraction of the renovated Willows Park, have now reached their final destination. With the incorporation and assembly of the reproductions of the Tyrannosaurus Rex, the Parasaurolophus, the Triceratops, and the Brachilosaurus, the remodelling of this public space will come to an end.

This was explained on Thursday 23 September by the Councillor for Public Roads, Juan Pedro Torralba, who stressed that “the complete remodelling of the Sauces Park was a long-awaited project for the people of Cartagena, which has given us all a lot of headaches, and we can finally say that its inauguration is imminent”.

“The design of the entire park has been done with the theme of the dinosaur world in mind, but we could not forget something as important as its functionality. That is why we have opted for LED lighting, as well as the installation of a shock-absorbing pavement in the children’s play area, with which we guarantee the safety of the little ones,” said the councillor.

With nearly 4,300 square metres, Sauces Park is one of the largest recreational areas in the city “and our aim is for this project to meet the needs of the residents of the area and make it the most emblematic park in the Ensanche”, said Torralba.

Next week the work of assembling and anchoring the dinosaurs will be completed, bringing to an end this project in which the City Council of Cartagena has invested a total of 218,997.90 euros.