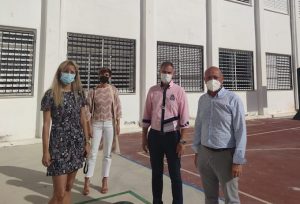 Regional delegate of Education and Sport of the Junta de Andalucía in Almería, Antonio Jiménez Rosales, has visited the CEIP Antonia Santaolalla in Taberno to see the result of the works that the Regional Ministry of Education has carried out in this educational centre, which have had an investment of 101,307 euros. During his visit, Jiménez was accompanied by the headmistress, Paqui García, and the mayor of Taberno, Antonio Martos.

The delegate thanked the school’s management team and the Town Hall for “the effort made over the last few years to move forward in adverse circumstances”. He also expressed his satisfaction with both the Delegation and the Town Hall for “the collaboration between the two bodies which has meant that today the school is in favourable conditions for the development of teaching practice”. The delegate was also informed of other needs of the school, such as a reform of the sports court and the creation of more shaded areas in the school playground, which will be studied to see their feasibility.

The project has involved the partial replacement of the school’s exterior carpentry with new lacquered aluminium carpentry, sliding panels and double glazing. The renovation of the exterior carpentry has been carried out in the main building, both in the canteen wing (classrooms and corridors on the first floor and ground floor) and in the administration wing (administration area, staff room and gymnasium); in all those teaching spaces, administration and corridors, where there was old or poor quality carpentry. This is a partial replacement because it completes previous minor actions carried out by the City Council.