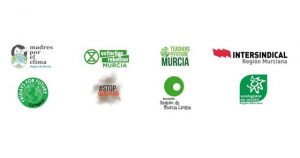 On 24 September, the World Climate Strike will be celebrated around the world, with the slogan “Judgement for the Climate”. On the occasion of this day of strike, different groups in the Region of Murcia have drawn up a manifesto in which they call on the regional government to take immediate action to combat climate change, reminding them that they are responsible for the future of their 1,500,000 inhabitants and the generations to come.

The manifesto points out that more than a year ago the Climate and Environmental Emergency was declared in the Region of Murcia and, since then, no measures have been taken in accordance with this declaration, nor has the Strategy for Mitigation and Adaptation to Climate Change in the Region of Murcia been implemented. Nor has provision been made for the staff and resources necessary for the development of this Strategy.

Taking into account the intensification of the effects of climate change that we have witnessed in recent months (fires in the eastern Mediterranean; floods in Central Europe, Valencia or Águilas; storm Filomena; sixth generation fires such as the recent one in Sierra Bermeja; increase in heat waves; etc.) and the special vulnerability of our Region, evidenced in different scientific studies, these groups affirm that the measures to combat it cannot wait any longer.

There is no longer any doubt that the effects of climate change mean human and economic losses, destruction of homes, devastation of natural areas… so they demand the Regional Government to exercise its responsibility and do everything possible to avoid them.