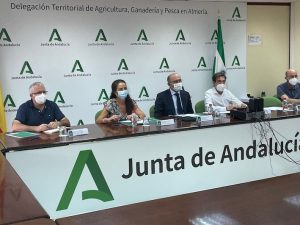 Territorial Delegation of Agriculture, Livestock and Fisheries has called a meeting with companies, producers and traders in the citrus sector in the province of Almeria with the General Directorate of Agricultural and Livestock Production to explain the treatment of pests and diseases in the sector.

Directorate General gave a detailed presentation of the Andalusian Citrus Phytosanitary Surveillance Plan being developed by the inspection teams of both the Regional Ministry and the Territorial Delegation, with the aim of keeping all the companies in the sector informed and establishing the necessary alerts for any incident that may arise as a consequence of the introduction of new pests in citrus plantations in Almeria.

The meeting was attended by the Director General for Agricultural and Livestock Production, Manuel Gómez, and the territorial delegate for Agriculture, Aránzazu Martín, together with technicians and the main companies involved in citrus production and marketing, especially oranges, mandarins and lemons, as well as agricultural organisations and Coexphal who thanked the information received and the effort being made to increase the number of controls, which have doubled in the last two years.

The territorial delegate, Aránzazu Martín explained that “the Regional Ministry maintains a constant channel of communication and information with the technical managers of other autonomous communities such as Valencia, where the incidence of these pests has been detected, in order to anticipate their development in our province”.

Likewise, the technicians highlighted the importance of developing biological control techniques in this type of crop more intensively, given that at present we have not reached the level of vegetables where the effectiveness of these techniques free of phytosanitary treatments has already been proven.

In this sense, organic cultivation has also been addressed, given that the surface area of these citrus fruits is increasing every year and logically their control requires greater difficulty, given that they have fewer tools for control than traditional cultivation.

In particular, the type of pests on which the regional delegation insisted were delottococcus aberiae, cotonet, and the importance of certain measures such as disinfecting the harvesting boxes as this is one of the ways in which it spreads most rapidly.