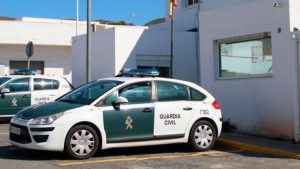 In a recent action, Guardia Civil has arrested a 30 year old man in Purchena, as the perpetrator of a crime of attempted burglary.

This action began after receiving an alert at the Complex Communications Centre (C.O.C) of the 062 of the Command of the Guardia Civil of Almeria, an alert of an incursion inside a house in the municipa

the security cameras and due to the large size of the house, they decided to guard the possible exits and wait for the support of another patrol of officers on the suspicion that the perpetrator was still inside.

lity of Purchena, which immediately transferred the warning to the patrol on duty closest to the place.

On arriving at the scene as soon as possible, the Guardia Civil officers met with the alerter and after checking the images from

As a result of this action, and after a thorough inspection of the house, agents of the Guardia Civil of Almeria, locate a 30 year old man hidden inside a wardrobe, who is immediately arrested as the perpetrator of a crime of attempted burglary.

It was later found that the detainee had a number of previous police records for similar offences.