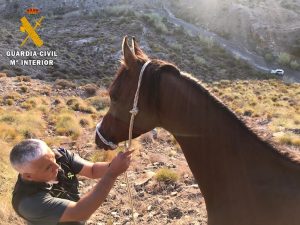 Agents of the Guardia Civil, specifically a patrol of the Seprona de Albox, located and rescued an Arabian horse reported missing last Saturday in the municipality of Huércal Overa.

The action of the agents began when the animal was located in a mountainous area of difficult access in the municipality of this town.

Given the complexity of rescuing the animal, the officers planned a rescue operation, assessing the conditions in which the horse was found and the adverse conditions of the terrain.

The agents spent half an hour to reach the place where the horse was found, a very complicated ascent on foot due to the rough terrain with a gradient of over 30 %, and carried out an initial inspection, observing that during the ascent the animal had suffered many injuries to its limbs.

Given the dangerous conditions of the terrain and the stress level of the horse, the agents meticulously designed a device that would allow the animal to be moved to a safe area without injury to either the animal or the agents.

Thanks to the expertise of the Guardia Civil officers, after an hour’s slow ascent up the mountain, they managed to reach a safe area at the top, relieving the animal’s stress level at all times to prevent it from panicking.

Once the horse had been rescued, it was handed over to its owner, who was waiting at the top of the mountain together with local residents.