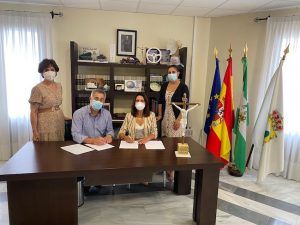 The Spanish Association Against Cancer, represented by its provincial president, Magdalena Cantero Sosa, and the City Council of Olula del Río, with its mayor Antonio Martínez Pascual, have signed a collaboration agreement in the programme “Smoke-free spaces”, accompanied by the president of the Local Board of Olula del Río, Dolores Señor Domínguez and the councillor for Social Services, Mª Dolores Pozo.

“Smoke-free spaces” is a proposal of the AECC to promote the creation of environments free from exposure to harmful smoke from traditional and/or electronic tobacco, in open spaces for public and collective use, as a concrete action to support and complement the current strategy against smoking focusing, above all, on the protection of the health of minors.

The Olula Town Council undertakes to disseminate the prevention messages of the AECC and to promote the necessary regulations for the prohibition of smoking in its outdoor facilities, this being the main object of the collaboration. The AECC will provide resources and tools that contribute to smoking prevention and smoking cessation services, among others.

The Provincial President of the AECC, Magdalena Cantero, stated that “generating synergies of collaboration with Town Councils and other public or private institutions is a fundamental tool for achieving health objectives. Tobacco is the cause of 30 percent of diagnosed cancers, so it is vitally important to avoid its consumption and act on prevention. For this reason, Cantero Sosa insists on the importance of involving the municipalities and their councils in this common battle by creating “No Smoke” areas that serve as a good example for children and young people. He also wanted to thank the mayor of this town, Antonio Martínez Pascual, for the sensitivity shown in this public health issue and for contributing to the reduction of smoking, which is the main risk factor in diseases such as cancer, but also in many others.

For his part, the mayor highlighted the collaboration of the Olula del Río Town Council with all the projects and initiatives that the AECC has been proposing in recent years, assuming these as another objective of municipal management. “This agreement on Smoke-free Spaces will contribute to improving the quality of life and health of our neighbours, which is the most important thing for this council. Finally, Antonio Martínez Pascual thanked the local board of Olula del Río for their hard work and expressed his gratitude to the new provincial president, Magdalena Cantero Sosa, to whom he wished the best of luck in this new phase.

The AECC, 68 years of experience in the fight against cancer

The Spanish Association Against Cancer (AECC) has been the leading organisation in the fight against cancer for 68 years. It dedicates its efforts to showing the reality of cancer in Spain, detecting areas for improvement and setting in motion a process of social transformation to correct them in order to obtain a comprehensive and multidisciplinary approach to cancer. Its DNA is to be by people’s side, which is why its work is also aimed at helping them to prevent cancer; to be with them and their families throughout the process of the disease, if they are diagnosed; and to improve their future by promoting cancer research. In this sense, through its Scientific Foundation, the AECC brings together the social demand for cancer research, financing quality scientific cancer research programmes by public tender. Today, it is the social and private entity that allocates the most funds to cancer research: 79 million euros in 400 projects, in which more than 1,000 researchers participate.

The Association brings together patients, relatives, volunteers and professionals who work together to prevent, raise awareness, accompany those affected and finance cancer research projects that will lead to better diagnosis and treatment of cancer. Structured in 52 Provincial Branches, and present in more than 2,000 Spanish towns, it has almost 30,000 volunteers, more than 454,000 members and 1,007 professionals.

During 2019, the Spanish Association Against Cancer has assisted 318,264 people affected by the disease.
*** Translated with www.DeepL.com/Translator (free version) ***