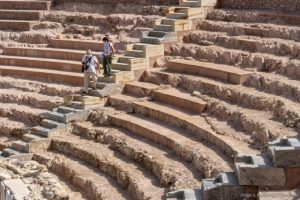 The Roman Theatre has extended its opening hours and opening days to give travellers visiting the city during these days the opportunity to visit the monument. It will remain open on 12 October, Columbus Day, so that on Sunday 10 the opening hours will be extended until 18.00, and Monday 11 will be open from 10.00 to 18.00h.

The museum tour begins at the Museum, whose entrance is located in the Town Hall Square opposite the Town Hall, and is a journey through time through its exhibition halls, culminating in the unexpected appearance of the imposing grandstand of the Roman Theatre. The Museum has the novelty of incorporating and linking buildings, allowing the visitor to bridge a notable difference in height between the Port and the Theatre. Therefore, it is conceived as an itinerary from the sea to the higher levels, culminating the visit with the unexpected appearance of the imposing grandstand of the Theatre. This route, in the words of Rafael Moneo, is a musealised “promenade”.

The Roman Theatre Museum also implements its activity during this long weekend with themed routes and visits in collaboration with Cartagena Port of Cultures.

Saturday 9th you can enjoy the route with a taste of History. CARTHAGO NOVA: TRAVEL TO THE ORIGINS. Guided route with a gastronomic tasting tapa. The route starts at the Roman Theatre Museum to discover the splendour of Carthago Nova and continues through a complete Roman house, with beautiful mosaics and paintings, until it reaches the Punic wall, from where Hannibal set off to confront Scipio. The route ends with a tapa tasting of rich Mediterranean gastronomy. The route will start at the Roman Theatre Museum of Cartagena at 11:00 am.

On the same Saturday at 12.00h will begin the guided route FROM THE THE THEATRE TO THE DOMUS OF THE PÓRTICO. The route will start at the Museum of the Roman Theatre and will continue through the rooms of the Museum until we reach the magnificent Roman Theatre. After leaving the monument, we will continue to one of the most typical corners of the old Fishermen’s Quarter, the Soledad alley, to visit the remains of the portico of the theatre preserved in the Domus del Portico.

Families and travellers can also take part in the family activity COME TO THE THE THEATRE. ROMANO SOY, which will start at the Roman Theatre Museum on Sunday 10th at 11:00h. A dynamic visit, where we will learn about the origins of the theatre, introducing us to the theatrical performances during the festivities in honour of Dionysus. On arrival at the site, a comedy and a musical dithyramb will be staged.

On Sunday 10th you can also enjoy the guided tour TREASURES OF ROME. At the Roman Theatre Museum, you will see the magnificent ornamental programme until you reach its imposing stands, to continue to the Forum Museum, which houses the archaeological treasures, such as paintings and sculptures, of the baths and temples of a great city of the Empire. The route will start at 11.00 from the Roman Theatre Museum of Cartagena.

On Tuesday 12th, the dramatised route JULIUS CAESAR AND THE DREAMED CITY. Julius Caesar awarded Cartagena the title of “Colonia Urbs Iulia Nova Cartago” as a merit, in reward for the services rendered in the civil war against Pompey. From the hand of the divine Caesar, the great conqueror, and his eternal lover, we will learn about his life in the city that considered that whoever possessed Carthago Nova, dominated Hispania. The route will start at the Roman Theatre at 11.30am.