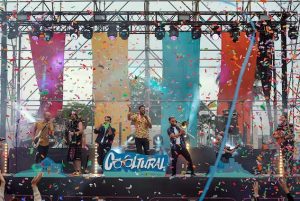 The park in front of the Cuevas de Conan was the setting for a ‘secret show’ on 10 April, the Cooltural Fest format in which the audience doesn’t know who they are going to see perform until they appear on stage. That was the start of the second season of the Cooltural Go! concert series, the initiative with which the festival, organised by the Department of Culture and Education of the Almería City Council and Crash Music. A succession of concerts, gastromusical route, children’s activities, secret shows… which has attracted more than 20,000 spectators after the closing of the 19th with a triple performance by Arco, Guiu Cortés and Mr. Kilombo at the Mesón Gitano.

The Councillor for Culture, Diego Cruz, considers that “as we have done with many of the Department’s events, such as the Flamenco Festival, the Jazz Festival, the Sacred Music series, the Book Fair, and many other initiatives, the Cooltural Go! activities were yet another example of our commitment to #SafeCulture, both with the sector and with the public of Almeria and those who have visited us, offering an important range of leisure, culture and entertainment, which has had an excellent response of attendance and, most importantly, without generating a single outbreak in these events”.

From Crash Music, one of its directors, Diego Ferrón, explains that “as we did last summer, we had to go ahead complying with all the measures that have been dictated at all times, it has been a very hard year that we have been able to move forward with a titanic effort together with the Culture Department”. Looking ahead to next year, Ferrón hopes “to be able to hold the festival in 2022 in the most normalised way possible. We have to be cautious and always respecting all the health regulations that are in force, but we want to be optimistic,” he concludes.

This year’s edition of Cooltural Go! has featured such outstanding names as Amaral, La Pegatina, Martita de Graná, Love Of Lesbian, Iván Ferreiro, Fuel Fandango, Carlos Sadness, Sidonie, Miss Caffeina and Xoel López. All the outstanding concerts have had an opening act, often from Almería, such as The Dry Mouths, Lena Carrilero, Lu&Cía, El Bombo or Laura Diepstraten. Another highlight was the third Cooltural Fest as such, with Dorian and Viva Suecia as headliners.