The regatta, which will be held between 8 and 15 October 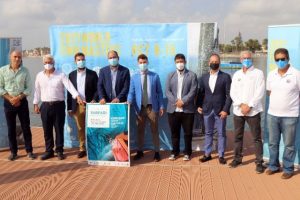 The Finn Master World Championship will have a total of 122 sailors from 24 countries. The regatta, which will be held from 8 to 15 October, was presented today at the ‘Infanta Cristina’ Sports Technification Centre, the venue for this international event, in Los Alcázares, in the presence of Francisco Sánchez, Director General of Sports of the Region of Murcia; Mario Pérez, Mayor of Los Alcázares, accompanied by Pascual Lamas, Councillor for Sports; Juan Francisco Martínez, Director of ITREM; Javier Navarro, Director of CTD Infanta Cristina; Pedro López, President of the Estación Náutica Mar Menor; Alfonso Gómez and Manuel Díaz, representing the CN Mar Menor Los Alcázares and Arturo García, President of the FVRM.

The president of the territorial Murcia has opened the chapter of interventions thanking the support of all institutions, as well as sponsors and partners, but especially the CN Mar Menor for their unconditional support, because “thanks to all has been and is possible to host this important international event in the Mar Menor, which will have a very high participation”.

García wanted to highlight “the Legends category, with 10 boats registered and whose sailors reach and even exceed 70 years of age, as well as the Super Legends, with 80 years of age and three boats registered. A merit and a relevant fact that places this boat, which until the Tokyo Olympics has been Olympic and has more than 70 years of history, as one of the most attractive in all of dinghy sailing”.

As for the representatives of the institutions of the Region, as well as municipal, they have agreed on the relevance and importance of hosting events of this level. They also wanted to emphasise that the Finn Master World Championship is only part of the month of October, which is full of major international and national events, including the Surfari Mar Menor, a regatta that will also be held in the Mar Menor from 8 to 10 October.

A regatta with weight within the windsurfing speciality, consolidated and one of the most attractive, bringing together in that short space of time a large number of sailors and companions, which makes it the best argument for the economic revival of the area, mainly.