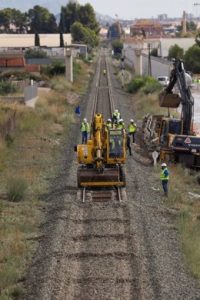 Adif Alta Velocidad has started to carry out the first works for the Murcia-Almería high-speed railway connection, which is part of the development of the Mediterranean Corridor.

It is worth mentioning that the president of Adif Alta Velocidad (Adif AV), María Luisa Domínguez, presented last August the set of works that will enable the creation of this first direct railway connection in history between Murcia and Almería, with the clear challenge of creating a “powerful and modern railway network in this sector of the Mediterranean arc”.

With an estimated investment of more than 3 billion Euro, this is an “essential” milestone for the development of the Mediterranean Corridor in an area of “great socio-economic potential”, since both capitals will be connected with the rest of the high-speed network in Spain and, by extension, with Europe, through the TEN-T trans-European network, according to Adif sources in a press release.

Thus, the new network in this area will become a “symbol of modernity, making a qualitative leap to reach the levels of the major European networks and becoming a high-performance international node”, according to the same sources.

On the other hand, it aims to provide the Murcia-Lorca-Pulpí-Águilas section with standard gauge with the most modern safety systems and to increase citizens’ safety and railway operation by eliminating level crossings are among the main objectives of this ambitious works plan.

Between Murcia and Pulpí, a double-track platform will be created for standard gauge and electrified track, and from there the lines will branch off to Almería and Águilas, the latter town to which the train will also arrive on standard gauge and electrified track, as opposed to the current situation of single track on Iberian gauge without electrification.

TRAFFIC INTERRUPTION
In this way, Adif AV claims to face “one of the biggest challenges in recent years” and has made a “great planning effort, even more so when working in dense urban centres and with the need to act on the existing railway platform in almost the entire route”.

After studying all the possible options, it has been concluded that the most advantageous way to make the most of the European funds of the recovery and resilience mechanism (MRR) is “to reduce as much as possible the execution time of the works and to work simultaneously in several sections”, so it is “essential” to interrupt the railway traffic, as Adif announced.

Moreover, the Administrator highlighted that this reduction of the deadlines “will benefit both the population and the productive fabric of the affected areas, as well as the development of the Mediterranean Corridor itself, since it will speed up and facilitate the commissioning of this essential section”.