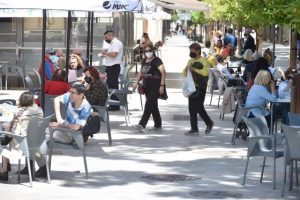 The Covid Monitoring Committee in the Region has extended the maximum opening hours for all non-essential activities to 4.00 a.m., “taking into account the limitations of the licences granted for each activity”.

This was announced by the Regional Minister of Health, Juan José Pedreño, who appeared at the press conference following the meeting of the Monitoring Committee.

Pedreño pointed out that the month of October has begun, maintaining the “generalised” downward trend. Specifically, he indicated that this week there has been a 40% drop in the average regional rate. To date, the cumulative incidence rates stand at 64.9 cases per 100,000 inhabitants at 14 days and 24.2 at seven days.

He pointed out that the improvement in the epidemiological situation and the progress in the vaccination campaign allows the Regional Ministry of Health to face a “progressive relaxation” of the established measures, “always relying on the responsible and prudent attitude of society in the Region”.

Having analysed the figures and the evolution of the pandemic in the different municipalities, the Committee has agreed to maintain the Region at alert level 1 (low) for another week.

With regard to the municipal level and given the evolution of the rates, Pedreño said that the measures will “generally” become applicable at regional level and not by localities, as was the case until now, unless the municipalities are at levels 3 (high) or 4 (very high).

This week, he pointed out that there are only four municipalities at alert level 3 (high): Cehegín, Lorca, Lorquí and Santomera.

Pedreño pointed out that when a municipality is at level 3 or 4 “the capacity will be modified, both for leisure and hospitality, allowing in these cases a capacity of 50% indoors at level 3 and 30% indoors when level 4 is reached. Outside, however, 100% will be maintained.

The general capacity for the whole region will be 75% indoors and 100% outdoors. Thus, it will be the specific capacity of the venue that determines the maximum number of people. For example, in a celebration, if a restaurant has a hall with a maximum capacity of 1,000 people, 750 people will be able to enter inside.

In the hotel and leisure sector, the maximum number of people per table, which until now was six people indoors and ten outdoors, has been abolished. However, he specified that everyone will have to be seated at the table and that consumption at the bar will be prohibited.

Likewise, according to the law, the use of masks will continue to be obligatory indoors and also outdoors when the safety distance cannot be respected, except in the case of the hotel and catering trade when consumption is taking place.