After two years of hiatus as a result of the DANA and the covid-19 pandemic, the residents of the municipality will enjoy a great programme for the 38th Anniversary of Municipal Autonomy.

The year 2021 is the 38th Anniversary of the Municipal Autonomy of Los Alcázares. A commemoration that we have been celebrating since 1983. A year that came to life, was engraved in the memory of all alcazareños and alcazareñas and that, as the Mayor of Los Alcázares said last night, “taught us that together we are stronger. A union that made it possible to reach a milestone that no one else would achieve later, that a town would recover its voice, its identity, its territory and its way of being”.

The head of Alcazar also said that for him “it was an honour to be here to present the festivities that celebrate our municipal autonomy after several years of stoppage due to the DANA and the pandemic of covid-19”.

Pérez Cervera also referred to the great programming that the municipal festivities have this year thanks to the “low incidence of covid-19 as a result of the vaccination that has been carried out”. According to the mayor of Alcazar, the current situation has made it possible to recover a large number of activities “totally compatible with the evolution of the virus”. In addition, he stressed that “it is still too early to recover one of the most beloved traditions for all Alcazareños and Alcazareños, such as the day of the caldero”.

However, the Mayor of Los Alcázares assured that “today is a time of hope and joy and that this edition should serve to reconnect with life, celebration and ourselves as neighbours of Los Alcázares”.

Finally, Pérez Cervera also had time to announce this year’s Al-Kazar Award: the Mar Menor. One of the most precious assets that the Region of Murcia possesses and which, in the words of the Mayor, will be honoured for its “unquestionable contribution to the social and economic development of Los Alcázares”. 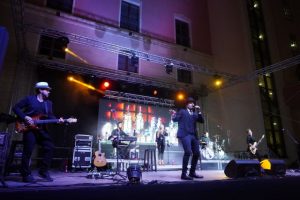 After the opening speech by the Mayor of Los Alcázares, it was time for the first of the concerts scheduled for the festivities celebrating Municipal Autonomy: ‘500 noches. Sabina in the veins’.

A tribute that once again showed the reasons why it is considered the best tribute show to Joaquín Sabina. The group delighted us with a very careful tour of the maestro’s career, a tribute to his music which, together with the unquestionable quality of the professionals who make up the group, has earned them the recognition of critics and audiences alike.

After the concert, Darío Luis and the rest of the group wanted to “thank the Town Hall of Los Alcázares for the organisation and commitment to culture and live music”. In addition, they also assured that “it is always very special to return to play at home and to be very excited by what the Region of Murcia transmits to them”. Finally, they addressed the audience, whom they wanted to thank for “filling the square”.