The coastal town of Puerto de Mazarrón hosted a new edition of the Copa del Rey de Motos de Agua, in a spectacular setting for the practice of this sport and where the organisers, led by the Federación de Motonáutica de la Región de Murcia, feel at home. Every year, during the month of October, the best national pilots from all over Spain attend the event to celebrate the King’s Cup and also the last round of the Spanish Championship. At the same time, the Spanish Flyski Cup was also held.

On Saturday morning, the day began with the Circuit tests in its different categories. After the pilots’ meeting, the participation of the youngest pilots began, in the Jet Ski GP3 Junior category, in which the first three places were won by the pilots Stepan Malov, from Murcia; Ciro Pereira, from Andalusia; and Diego Rico, from Galicia. In Jet Ski GP3, the first classified was Ritchie Valentino, from Andalusia; in second place, Stepan Malov; and in third place, Amador Ferrer García, from Murcia.

In runabout, in the GP0 category, the winners were Ismael Rojas, Andalusia; Carlos Vela, Madrid; and Oscar Jimenez, Andalusia. In GP4, the top three were Alejandro Prats, Balearic Islands; Adrián Albuera, Andalusia; and Jesús Cabello, also from Andalusia. In GP2 Promotion, Rubén Jiménez, from Murcia, climbed to the top of the podium; in second place, Juan Carlos Palau, Balearic Islands; and Ginés García, Murcia. Finally, the main category, GP2, was dominated by Alejandro Molina, from the Canary Islands, but registered in the Murcian Federation, who managed to win two of the three rounds, finishing second in the other one. Víctor Jiménez, from Andalucía, also had an excellent participation, obtaining a first, a second and a third place. The third classified was Rubén Jiménez.

The day passed without any significant incident, with almost perfect weather and with a large public attendance, which filled the beach and the terraces of the bars and restaurants nearby. It concluded with the awards ceremony, which took place on the same beach, around six in the afternoon, and was attended by representatives of the four organising bodies, the Councillor for Sports of the Mazarrón Town Council, Francisco García, the President of the Spanish Federation of Motonautics, José Miguel Martínez; the President of the Federation of Motonautics of the Region of Murcia; Dionisio Baño; and the President of the Nautical Club, Juan Marín.

On the other hand, the flyski eliminatory tests were disputed throughout the day, with more than 20 participants and with a great atmosphere of public overturned with the spectacular acrobatics of the raiders.

As a climax, Quique Soriano starred in a pyrotechnic show, flying over the competition area with a backpack from which jets of fire came out, in the darkness of the night it was quite a visual show. 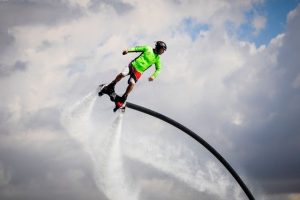 On the morning of Sunday 10th October, the Jet Rally and Offshore Rally events were held, with the participation of almost fifty pilots. The competition began with the jet rally, which consisted of completing 20 minutes plus one lap of a circuit set up with buoys in front of the Port beach. The winners of the GP0 category were Carlos Vela, Óscar Jiménez and Amador Ferrer Pardo. In GP4, the first three were Alejandro Prats, Juan Carlos Palau and Jesús Cabello. In GP1 Atmospheric, Enrique García, Antonio Cabrera and Iñaki Traba dominated the classification. In GP2, Víctor Jiménez, Rubén Jiménez and Francisco Javier Prieto, topped the podium. In the GP1 category, the first three classified were Andoni Gutiérrez, Samuel Pujante and Arturo Cecilia. Finally, in GP2 Promotion, the winners were Ginés García, Jordi Bermúdez and Ian Arce.

Then, at around twelve noon, the long awaited offshore race began, with a grid along the beach, with the riders mounting their bikes for the race. The direction, tower of Santa Elena, returning to the beach of the Port and heading towards Puntas de Calnegre, where the participants went around a boat of the organisation and back to the beach of the Port.

After the first lap, the riders refuelled and set off again to complete another lap of the same circuit. The winners of the different categories were, in GP4, Juan Carlos Palau and Alejandro Prats. In GP2 Promotion, Tirso de Garcillán, Miguel López and Javier Menéndez. In GP2, José Ángel González, Francisco Javier Prieto and Pablo Velasco. In GP0, Carlos Vela, Óscar Jiménez and Amador Ferrer Pardo. In GP1 Atmospheric, Eduardo Belchí, Jorge Conejero and Antonio Cabrera. In GP1, the first three were Pedro José Vigueras, Samuel Pujante and Félix Rodríguez.

Also, on Sunday morning, the semi-finals and finals of the spectacular flyski modality were held in the area next to the Port beach. The number of spectators was extraordinary during the two days, this sport is gaining more and more followers year after year, and the quality of the participants is increasing noticeably. During this edition, participation was divided into expert raiders and those performing their first acrobatics on the water.

The first three classified in the promotion category were Javi Fortea, Jorge Encabo and Aarón González, the latter coming from Mazarrón, so it could be said that he was “playing at home”. The girls were María López from Mazarrón, Iva Palikarova and Marina Sánchez.

In addition, at the end of the competition, Elena Vera and Quique Soriano treated the audience to a dance on the water.