The Minister of the Presidency, Public Administration and the Interior, Elías Bendodo, has made Andalusian businessmen and the self-employed the main players in the region’s economic recovery, while at the same time assuring that the Andalusian Government will continue to do its utmost to facilitate investment and job creation for entrepreneurs.

“It is you, the companies and entrepreneurs, who generate employment and make Andalusia a leader in economic recovery. To this end, the Andalusian Government is making life easier for you by reducing bureaucratic obstacles, strengthening public services with unprecedented investment in health and lowering taxes to attract projects”, explained Bendodo. 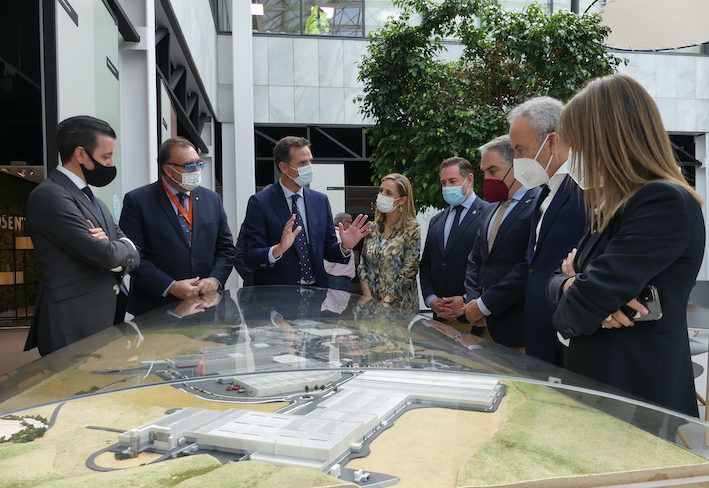 He did so during a visit to the Cosentino Group’s facilities in Cantoria and later to Macael, where he signed an addendum to the collaboration agreement between Extenda and the Andalusian Association of Marble Entrepreneurs to further enhance the international promotion of Almeria’s natural stone and participated in the recognition of the companies that have altruistically collaborated in the creation of the sculptures in tribute to the health workers during the pandemic.

The Minister of the Presidency highlighted the value of the Cosentino Group as one of the leading companies in Andalusia and with the greatest international projection, at the same time as highlighting the fact that the Almeria-based company has created more than 700 jobs in the last year despite the pandemic.

Thus, Bendodo highlighted the export muscle of the province of Almeria and specifically in the natural stone sector, where exports amounted to 465 million euros in the first 7 months of 2021. He also stressed that Almeria accounts for 98.5% of Andalusian exports in the sector and more than half of national exports (56%).

On the other hand, he also highlighted the growth of exports in the sector with respect to 2020, which is 49%, a rate 12 points higher than the average for Spain. Another fact that he highlighted during his speech is the growth of exporting companies in Almeria, with 12% more; which consequently means a growth in sales to key markets such as the United States, United Kingdom, Canada, China or countries of the European Union.

“Our objective is clear: to reinforce Almeria’s leadership in exports in the natural stone sector,” said the Minister of the Presidency, who to this end has signed an addendum to the collaboration agreement between Extenda and the Andalusian Marble Business Association for its international promotion.

With this addendum, a new cultural-business activity will be planned on the historical architectural heritage linked to the use of marble and will be aimed at architects, decorators and importers from various countries in Europe, the United States, the United Arab Emirates and Saudi Arabia.

On the other hand, the Minister of the Presidency took part in the recognition of the companies that have collaborated in the altruistic creation of the sculptures that have been used to pay tribute to the health workers during the pandemic.

“On behalf of President Juanma Moreno and the entire Andalusian government, I would like to express my most sincere thanks to the Andalusian Marble Business Association for altruistically promoting these eight sculptures for the eight capitals of the region”, said Bendodo in Macael, where he added that these works not only pay tribute to health workers, but also “recognise the work of all the essential sectors that gave their best during the worst moments of the pandemic”, he concluded.