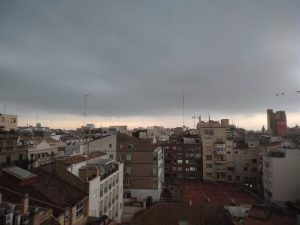 The Comunitat Valenciana has experienced a Sunday characterised by cloudy skies, with showers in general weak, but that, in an isolated way, in points of the coast of Alicante have had strong intensity. Specifically, in Benidorm have accumulated 25.8 litres per square metre (l/m2), of which 15.2 have fallen in just one hour.

The rain has fallen with some intensity during this Sunday on the coast of the province of Alicante in a day that has been marked by cloudy or overcast skies, according to information from the State Meteorological Agency (Aemet), collected by Europa Press.

This Monday, daytime temperatures will rise across the board in Spain, and may exceed 30ºC or 32ºC in the Canary Islands and the lower Guadalquivir. In the eastern Mediterranean area there will be cloudy intervals with probable showers in the Balearic Islands and the southern coast of Catalonia, which will be less likely in the Valencian Community and heavy showers are not ruled out in Mallorca.