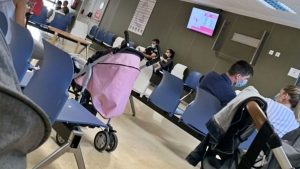 Respiratory viruses have made a strong appearance in paediatric consultations and emergency departments in the Region of Murcia with the onset of autumn. Cough, mucus and fever are the most obvious signs that the viruses have arrived and which specialists have been dealing with in recent weeks in the face of other types of ailments, more common in the months of December, January and February. The respiratory syncytial virus and bronchiolitis are taking centre stage earlier than expected and this is confirmed by numerous paediatricians in the Region. Last year the respiratory syncytial virus “went unnoticed and we attributed it to the use of masks, but in summer some cases began to appear and since the beginning of October there has been an upturn”.

This autumn-winter could be very complicated because it will bring together two generations that have not passed the respiratory syncytial virus, this year’s babies and last year’s, when there were hardly any cases, says Dr Sánchez Solís. He also warns of what could happen when the flu virus arrives, “which is just around the corner”. In the Cartagena area, Joaquín Susmozas, head of the Children’s Emergency Department at the Santa Lucía Hospital, indicates that the increase in cases of respiratory viruses has been very noticeable in the last two weeks, “fifteen days in which we have seen more children than in the whole month of September”, with an increase of 50 percent in visits to the Emergency Department. Most of the visits that are being seen these days in paediatric emergencies correspond to respiratory viruses, “so we are very attentive to what may happen when the flu starts to appear, since we do not know how a vaccine that has been made without there having been hardly any circulation of the virus will behave,” explains the head of paediatric emergencies at Santa Lucía.

The neonatologist at Santa Lucía José Ramón Fernández says that there are several cases of children admitted to paediatrics and neonatology for respiratory viruses, both weeks and a few months old, so the RSV prevention campaign that is carried out every year will be brought forward to treat the little ones with a drug that helps them to increase their antibodies.