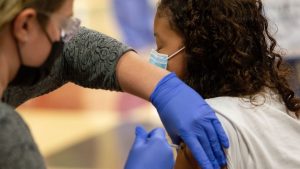 The more than 66,000 people in Murcia who have received Janssen’s coronavirus vaccine will be re-inoculated with a second dose of an RNA messenger compound. The Public Health Commission plans to approve this second injection in the next few days for the population that initially received the Johnson & Johnson compound, which nationally amounts to around two million people.

Those vaccinated with Janssen are expected to be the next group to receive a booster dose after immunisation of immunocompromised patients, users of nursing homes and those over 70 years of age.

The Ponencia de Vacunas, made up of experts, will propose to the Public Health Commission that a booster dose of Pfizer or Moderna be given to the almost two million people who received the Janssen single-dose serum.

According to sources close to the Commission, this booster dose is a possibility that vaccine experts have been considering for some time, since the same laboratory, at the time it applied its only vaccine, launched a clinical trial for the second dose because of its improved efficacy.

Once it has been submitted to the Public Health Commission, the proposal will have to be approved by the Interterritorial Council of the Public Health System (CISNS), which is made up of the Ministry of Health and the autonomous communities.

In this way, the 1.9 million people who have been administered a Janssen vaccine will receive a second booster dose with Pfizer or Moderna vaccines, both of which are messenger RNA vaccines.