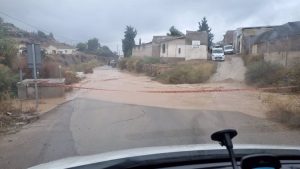 The Emergency Coordination Centre of the Region of Murcia has attended, until 13.00 hours this Friday, a total of 31 calls and has managed 29 incidents related to the rains, mostly due to flooding in streets, basements and garages.

By municipalities, Los Alcázares, Murcia and San Javier have been the most affected, with nine, six and five matters attended, respectively, followed by San Pedro del Pinatar (3); Molina de Segura (2); and Cartagena, Santomera and Totana, with one each.

In terms of rescues, firefighters from the Consorcio de Extinción de Incendios y Salvamento (CEIS) of the Region of Murcia have helped six people whose vehicles have come to a standstill as a result of the water, all in Los Alcázares.