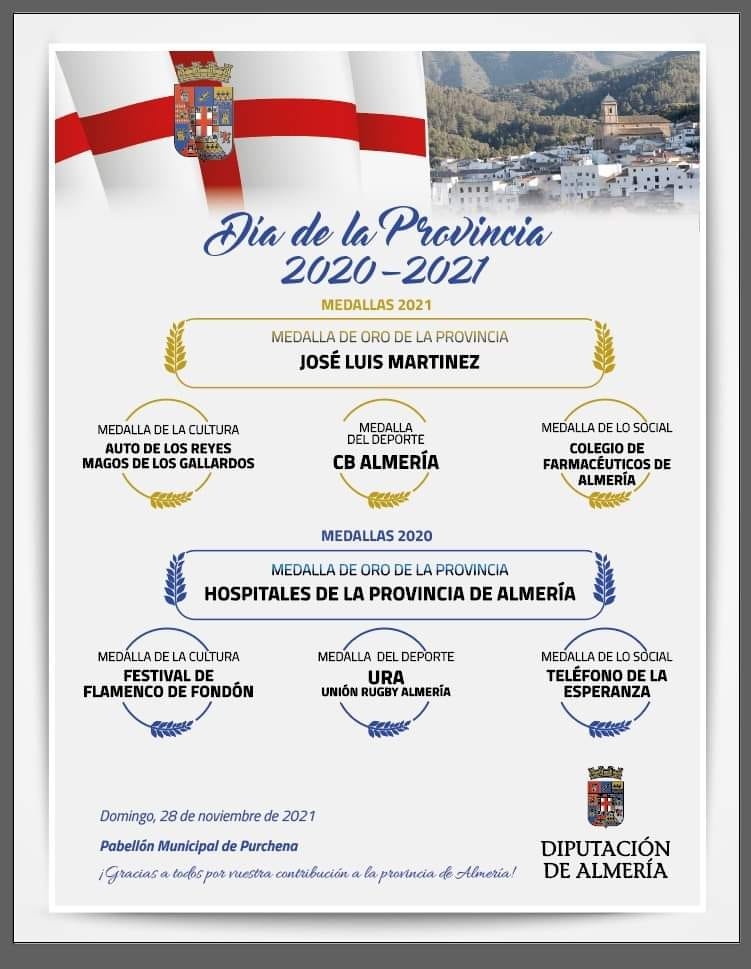 The Provincial Council of Almeria will commemorate the ‘Day of the Province’ in Purchena, on 28th November, with a solemn and emotional ceremony in which it will award its highest distinction, the Medals of the Province of 2021, to those people, institutions or entities that contribute with their work, talent and effort to the development of Almeria. The 2020 Medals of the Province, whose gala had to be postponed as a result of the pandemic, will also be presented at this event.

The Government team will submit to the next Plenary Session of the Corporation the proposal of candidates for this year’s Medals of the Province:

Gold Medal of the Province: José Luis Martínez García.
Social Medal: College of Pharmacists of Almería.
Medal for Culture: Auto de Los Reyes Magos of Los Gallardos
Sports Medal: Basketball Club Almería
The Government Team of the Provincial Council has discussed with the opposition political groups the proposal for this year’s Medals of the Province for the Plenary Session to be held on 28th October.

The journalist José Luis Martínez is an institution of communication and journalistic enterprise in Spain. He was one of the key editors during the Spanish Transition. In the newspaper La Vanguardia he wrote some of the articles of the Spanish Constitution. Among other positions, he was director of the news services of Televisión Española during the Calviño era. His business vocation brought him closer to Almería when he acquired La Voz de Almería, a communication group that has narrated the history of the province since it was founded in 1939. The La Voz de Almería group was later expanded with the Cadena SER radio stations.

José Luis Martínez has promoted the main strategic sectors of the province, such as agriculture, water and communications, through information from the pages of La Voz de Almería and the microphones of Cadena SER, as well as a strong advocacy for the improvement of infrastructures and services for all Almeria’s citizens. José Luis Martínez’s commitment to the interests of the province has been demonstrated through a solid career that has earned him a prestigious position as a communications professional.

The Almeria pharmacists’ association represents a group of professionals who have been fundamental during the pandemic due to their commitment to society as a whole. In the most complicated moments of the confinement, they worked tirelessly to supply health material and medicines to all citizens.

The College of Pharmacists of Almeria is working to promote the figure of pharmacists and raise awareness of the importance of this essential work, especially in the smaller municipalities of the province. The social function of pharmacists also includes collaboration with State Forces and Bodies in the detection of people at risk of exclusion or helping victims of gender violence. The province of Almería currently has more than 330 pharmacies and almost a thousand members.

Medal of Culture: The Three Wise Men of Los Gallardos

This is one of the most deeply-rooted traditions in the Levante region of Almería. The Auto Sacramantal de los Reyes Magos de Los Gallardos is one of those initiatives that safeguard the cultural heritage and the collective imagination of thousands of people from Almeria over time. With an exemplary neighbourhood involvement, this tradition fuses the illusion of the little ones for their Majesties of the East, with the family aspect of Christmas celebrations.

The Club Baloncesto Almería has played an essential role in the promotion of basketball and sport as a healthy lifestyle in the province throughout its history. Founded in 1960, it has been the first entity in the history of basketball in Almería, a discipline that has grown exponentially in recent years in all the municipalities of the province.

The club also stands out for its firm commitment to the training of the youth, which, in addition to technical notions, inculcates all the positive values associated with the sport such as teamwork, effort, respect, companionship, solidarity… Another aspect for which it stands out is the promotion of women’s basketball and the promotion of the sport among Almeria’s women.

The President of the Provincial Council, Javier A. García, stressed that all the people and entities awarded with these distinctions are “great representatives of Almeria’s values that make us proud to be from our land. They have all worked with selfless effort to improve the lives of their fellow citizens and have contributed to building a province with more opportunities, fairer and more prosperous”.

Finally, the president is confident that, finally, thanks to the evolution of the virus and, above all, to the high vaccination rates and individual responsibility, the event can be held in person with a large number of people in Purchena and that we will experience an emotional event that “vindicates our sense of Almeria and the pride of what we are, what we share and all that unites us”.