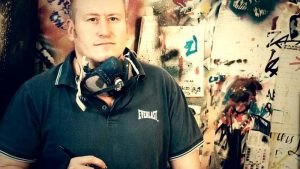 With the opening of borders and the gradual return to normality, Murcia Street Art Project has been able to resume its full activity. Thanks to Murcia Street Art Project, there are murals in the Region such as those of the Ivory Coast artist Médéric Turay or the Brazilian L7Matrix, world-class artists who left their tag in Murcia, adding to the status of ‘urban art friendly city’ which, it seems, has been sought after in recent years. But the colourful tentacles of the project promoted by Dario Vigueras have also reached Cartagena, Los Alcázares and, indeed, Alcantarilla, which from tomorrow will smell of paint again. On the occasion of the seventh edition of the aforementioned graffiti contest, a new hip-hop culture and urban art festival has been organised which will take place over the coming weekend – from Friday 29 to Sunday 31 – and which will feature, among others, the renowned British artist Dale Grimshaw, who will arrive in the town this Wednesday to start preparing his mural.

Because we are talking about a highly regarded artist with a “very refined” technique. “Just by going to his Instagram and looking at some of his pieces you realise that they are projects that take a long time and that have a tremendously detailed execution. And, of course, the result are works of great artistic value”, says Vigueras, who, about what he is going to paint in Alcantarilla, warns of the London artist’s taste for portraying the aborigines of Papua New Guinea. In this sense, the creative freedom they give their guests is one of the keys to the fact that Murcia Street Art Project has managed to make friends with some of the great figures of graffiti worldwide.

“We look for the artists who, we believe, best suit the characteristics of the event or the surfaces we are given. “Of course, with this same philosophy, last year’s festival was a success. In addition to the aforementioned, artists such as the Valencian Nenwapa, the Orihuela-born Mr. Nenwapa, and Mr. Blasco, “They know that people are going to appreciate it,” says the gallery owner, who assures us that the public’s interest in an art form as historically reviled as urban art is – at least in the Region – brutal. “People are extremely grateful.

Moreover, on this occasion, on a street and some pretty deteriorated walls…”, specifies Vigueras. In any case, Grimshaw will not be the only star of this edition. Also on the bill is Feoflip from the Canary Islands, who, according to the head of Murcia Street Art Project, is currently painting in Italy. “He has done pieces all over Europe and South America.

His pieces of biomechanical animals are very characteristic, in which he mixes technology and nature, and does things that would seem impossible for us ordinary mortals to do with a can and a nozzle, however fine it may be,” says Vigueras, who has already worked with the Tenerife native on other occasions. And finally, in addition to the winners of the City Council’s competition, the Murcian artists Nels, Pigüo, Amado and Ayron, who will be doing two murals, will also be performing throughout the weekend. “This fusion between the more traditional graffiti and the new forms of urban art can give rise to something very interesting,” Vigueras explains.