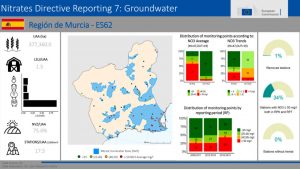 A European Commission report denies that the Mar Menor is eutrophicated. This is explained by Dr. Pedro Fernández, an agronomist engineer, who has compiled data from the European Commission’s report on the status of bodies of water in Europe.

Every four years, this report analyses the status of water bodies, both ground, surface and coastal, within the framework of the Nitrates Directive.

According to the data and graphs shown, in the period 2016-2019 -the last one analysed-, there is an improvement in the quantitative data with respect to previous years as far as nitrate pollution is concerned.

“The trophic state -enrichment of nutrients, especially nitrogen and phosphorus, in an aquatic ecosystem- of the Mar Menor has improved with respect to previous sampling periods,” explains Pedro Fernández.

As the graphs show, in the 2016-2019 period, which is where the first phytoplankton crises began, 100% of the official control points determine, “without any margin of doubt, that the Mar Menor is not eutrophicated”, he reveals. Therefore, “the death of fish and other species has not been due to nitrates,” says Fernández.

He also recalls that when the Organisation for Economic Cooperation and Development (OECD) establishes the criteria for eutrophication, phosphorus, chlorophyll and transparency as the main elements. “Nitrate is not included, which of course has an influence, but in a much smaller order,” he says.

In this sense, the agronomist recalls that both phosphorus and organic matter come from urban waste and a deficient sewage system. “They come from urban activity, as has been reflected in the monitoring reports published on the Mar Menor Canal,” he says.

“Establishing strategies to recover the ecological state of the Mar Menor based solely on the nitrate factor will be unsuccessful, will delay its resolution over time, and will have an unacceptable economic and environmental cost,” concludes the agronomist.

The report is available here: https://water.jrc.ec.europa.eu/portal/apps/opsdashboard/index.html#/cb6034c2a75e4df282f8a62f90c16caa