Francisco Martínez-Cosentino, Chairman of the Cosentino Group, the world’s leading global company in the production and distribution of innovative and sustainable surfaces for architecture and design, received this morning from His Majesty the King the 6th Kingdom of Spain Business Lifetime Achievement Award. The organisers of this award are the Círculo de Empresarios, the Cercle d’Economia and the Círculo de Empresarios Vascos. 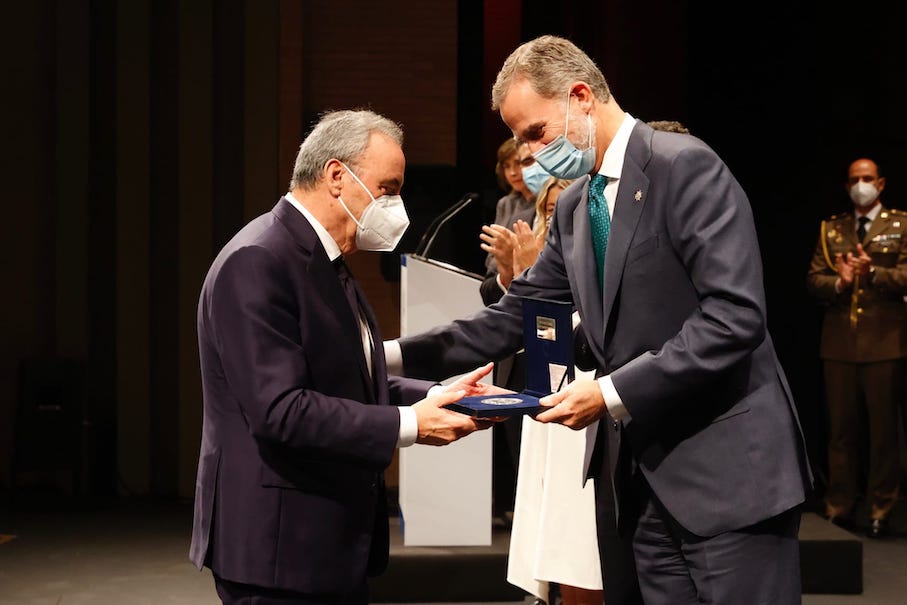 José Galíndez spoke on behalf of the organising bodies, highlighting the award winner’s “effort, work and vision to turn a family and local initiative into a business and global benchmark fully committed to its social function and respect for values of general or collective interest”. Galíndez also recalled that “society needs business leaders and it is necessary that the idea of entrepreneurship is present in the imagination of young people, considering it attractive for their life project and thus feeling that they are an important part of the improvement of society”.

According to the minutes of the Jury, the awarding of the Prize to Martínez-Cosentino was decided “by virtue of his contribution to the economic and social development of Spain over several decades of effort and work, creating jobs, internationalising his activities and contributing to the improvement of his environment and the welfare of the country. Reasons that make it a point of reference for future generations”.

The Jury that awarded the Prize was made up of distinguished representatives of Spanish civil society. Chaired by Carme Riera, member of the Royal Spanish Academy and professor at the Autonomous University of Barcelona, the jury was made up of Sara de la Rica (director of ISEAK), Victoria Camps (Emeritus Professor of Moral Philosophy and Politics at the UAB), Santiago Muñoz Machado (director of the Royal Spanish Academy), Victoria Prego (assistant to the director of El Independiente. com), María Blasco (director of the Instituto Nacional de Investigaciones Oncológicas), Núria Cabutí (CEO of Penguin Random House), Juan Manuel Bonet (art critic and poet), José Luis García Delgado (PhD in Law and Professor of Applied Economics), and Mercè Franquesa (secretary general of the Cercle d’Economia), who has acted as secretary.

During its six editions to date, the aim of the Kingdom of Spain Award has been to highlight the example for future generations of a relevant business figure who has carried out important work in Spain in terms of job creation, investment and internationalisation, and has contributed to the progress and well-being of Spanish society as a whole. In previous editions, Enrique de Sendagorta Aramburu, José Ferrer Sala, José Antolín, Mariano Puig and Plácido Arango were recognised. The award consists of a reproduction of a medal of merit from the time of Carlos III, the original of which dates from 1764.

This recognition is in addition to previous awards received by Cosentino’s Chairman, such as the Internationalisation Award from the Spanish Exporters and Investors Club (2011); the National Innovation Award in the Internationalisation Category from the Ministry of Economy, Industry and Competitiveness (2016); the Gold Medal for Merit in the Workplace awarded by the Ministry of Labour and Social Security (2016); the Commendation of the Order of the Spanish Chamber of Commerce (2020); and, once again, the National Award for Innovation in Large Companies, awarded by the Ministry of Science and Innovation and still pending (2021).