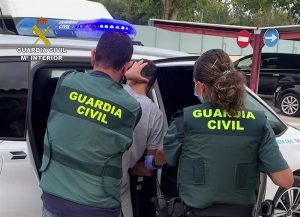 The Civil Guard of the Region of Murcia, in the framework of the operation ‘OKNABI’, has developed an investigation aimed at clarifying a series of thefts inside vehicles committed in the municipality of Torre Pacheco (Murcia), which has culminated with the identification, location and arrest of the two alleged perpetrators of the facts.

Following the operation, the Benemérita’s Citizen Security Prevention troops have cleared up, so far, fifteen robberies with force inside vehicles and one vehicle theft, according to sources from the Benemérita in a statement.

The actions began in early October, when the Civil Guard detected a significant increase in thefts with force in vehicles parked on public roads in the hamlet of Roldan pachequera, some facts that had generated some social alarm among the residents of the town.

The operation was launched by officers from the Benemérita’s Citizen Security Prevention Unit with the aim of investigating the offences and clarifying them, as well as reinforcing police presence to prevent the total number of robberies from increasing.

The technical-ocular inspections and other investigations allowed the investigators to verify that the acts were carried out in the early hours of the morning, taking advantage of the scarce presence of witnesses and the low visibility. The robberies involved the use of force against the windows of the vehicles to gain access to their interiors and steal all kinds of valuables, such as cash, eyeglasses and sunglasses, personal and vehicle documents and electronic devices (such as GPS), among other things.

In addition to the theft of objects, the perpetrators of the robberies also caused, for no apparent reason, considerable damage to the vehicles, even completely destroying the interior of some of the cars.

As a result of the investigation, the Guardia Civil identified two young men who were allegedly behind the crimes under investigation. For all these reasons, after obtaining all the necessary evidence, a search operation was set up which culminated in their location and arrest, as well as the seizure of tools used during the criminal activity and part of the stolen objects.

The analysis of the information obtained during the investigation has so far led to the clarification of fifteen crimes of theft with force inside vehicles and vehicle theft.

The latter is due to the fact that in one of the robberies, one of those arrested found a spare key to the vehicle inside, which he used to drive the vehicle until he crashed it into a roundabout, leaving it in a practically useless state.

The operation is still open, and it is not ruled out that those arrested are linked to other similar criminal acts, as well as further arrests.

The detainees, the effects seized, the objects recovered and the proceedings have been placed at the disposal of the Court of Instruction of San Javier (Murcia).