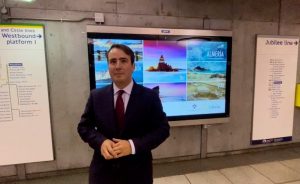 The Provincial Council has launched an unprecedented tourism promotion campaign for the ‘Costa de Almería’ destination in the capital of the United Kingdom. Since yesterday, the most spectacular coastal and inland enclaves of the province of Almeria are being projected in the busiest stations of the London Underground network throughout the month of November.

This action puts the finishing touch to the presence of the province of Almeria in the International Tourism Fair (World Travel Market), in which interesting alliances have been closed to reposition Almeria as a fashionable destination in the United Kingdom through new air connections and new contacts have been established to project the diversity of the destination with the most complete offer of the Mediterranean.

The deputy for Tourism, Fernando Giménez, has visited one of the 18 Underground stations where the digital muppys are located in which every 30 seconds the advertising of Almeria’s destination appears: Westminster. “We are here in the London Underground in front of an unprecedented action of the brand ‘Costa de Almería’. A total of 18 stations in the centre of the city and with greater traffic, both British and tourists, show our excellence and tourist attractions,” he explained.

He also stressed that “with the presence of the destination in London we continue to strengthen our brand and promoting ‘Costa de Almería’ in the British market coinciding with one of the most important tourism events on the planet.

The significance of this action transcends the British market as the Underground is one of the means of transport most chosen by visitors and tourists arriving every day in London: “In this way we are reaching millions of people every day who, tomorrow, will have Almeria as a reference destination for their holidays”.

This initiative is included in the joint actions developed by Diputación and Turismo Andaluz within the collaboration agreement for the promotion of the different tourist segments of the destination ‘Costa de Almería’.

WTM comes to a successful end

World Travel Market 2021 has been historic because it has meant a return to face-to-face attendance. The restrictions on mobility and the fear of the pandemic have reduced the number of accredited professionals and increased the quality of the contacts: “The companies that have participated in the Fair and have visited the Almeria stand have done so to present actions tailored to our destination”.

Although contacts have been established for possible promotional actions, the most important of the meetings has been the one that has allowed to establish an alliance with TUI UK to recover two regular flights to Almeria from Manchester and Birmingham and 20,000 seats.

Fernando Giménez stressed that “the presence of ‘Costa de Almería’ at the London Fair is of vital importance for the reactivation of international tourism”. In this sense, he stressed that “we have returned to show tour operators, travel agencies and consultants the reasons that make us the best destination in the Mediterranean”.