The Andalusian company Ocean Cleaner has proposed to the regional government to use a boat to remove the biomass from the surface of the lagoon while oxygenating the water. 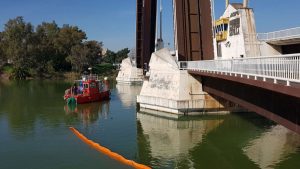 Eliminate the microalgae from the surface of the Mar Menor and at the same time artificially oxygenate the water once it has been cleaned. The Andalusian company Ocean Cleaner, based in the port of Santa María in Cádiz, has wanted to do its bit to alleviate the problem of biomass growth in the lagoon due to the large amount of nutrients in the water column. This entity is dedicated to the cleaning of floating spills such as oils, hydrocarbons or microalgae, as well as the filtering of plastics, microplastics and any floating marine debris.

After learning of the serious episode of marine species mortality last summer in the lagoon, the leaders of Ocean Cleaner contacted the Community to present a project that had already been successfully practised in other marine ecosystems such as in the waters of the Canary Islands. The objective, to absorb the surface water of the lagoon to filter filamentous algae or microalgae that grow as a result of the eutrophication process that the Mar Menor is undergoing. “We can capture large quantities of solid and liquid matter that pollute a sea up to half a metre deep,” says Santiago Miranda, head of the company’s Commercial and Sustainable Development department, “and return the water to the Mar Menor already clean. One possibility that the company wants to include in the project is to “feed” the water with natural or artificial oxygen: “We would try to avoid any anoxia processes that may occur in the areas that are always most affected”.

The company, which wants to test its technology in the Mar Menor for at least a few months to check its effectiveness, has already had a virtual meeting with technicians from the Community, who consulted on its effect on the seabed and the speed of work in the lagoon. The company’s experts proposed scientific monitoring after the clean-up to check the impact on the ecosystem and the results of the extraction.

Years ago, the Community used the famous ‘Finnish spider’ for the removal of mud and dry material in the shallow areas of the lagoon, a work that the Spanish Institute of Oceanography questioned because of its impact on the seagrass meadows. In this case, the technicians focused during the meeting on the need to suck up the decomposing biomass in the deeper areas of the lagoon or even on the seabed, where ‘pockets of chlorophyll’ have been detected.

Below the deck of the boat are machines capable of absorbing and separating solid waste on the one hand and liquid waste on the other, thus allowing the recycling of both types of waste: “an authorised management company could take charge of recycling all the material we collect on a daily basis”, Miranda points out.

The project, which is also open to marine research from the boat to take advantage of the sea outings, carried out the work of cleaning accumulated biomass on the beaches of Tenerife and Gran Canaria, where it was necessary to ‘sweep’ the surface to filter the water. “It was such a success that the Canary Islands government bought two boats for us,” he explains. For the time being, the company hopes to be able to use its technology in the lagoon.