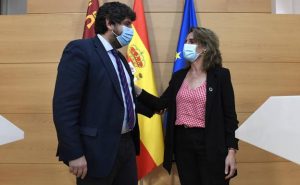 The Minister for Ecological Transition and the Demographic Challenge and Third Vice-President of the Spanish Executive, Teresa Ribera, and the President of the Region of Murcia, Fernando López Miras, staged a new rapprochement on Thursday regarding the actions to address the ecological crisis of the Mar Menor after months of reproaches. “We are convinced that the initiatives for the transformation and recovery of the Mar Menor grow when the different public administrations responsible work together,” said the vice-president. The regional president, who expressed his willingness to “maximum collaboration”, said that at the meeting they did not analyse “the document in detail”, although they did analyse its main axes, and agreed with the minister that the priority was to put a stop to illegal irrigation in the area surrounding the lagoon and the leaching of nitrate-containing water from the wadis. The minister reiterated her commitment to cut off water supplies to illegally irrigated plots, although she reminded the minister that reversing the state of the land is not within the CHS’s remit.

Miras said that the doubts expressed by his government about the budget allocation for the measures for the regeneration of the Mar Menor by the national government had been resolved. The meeting, which started late, followed an initial meeting between the minister and representatives of neighbourhood, environmental and business groups, as well as agricultural organisations earlier in the morning. This is the second rapprochement of positions between the regional and state administrations regarding the salt lagoon, and the second visit by the minister to the region to address this issue, following the meeting held at the end of August.