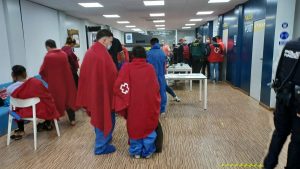 The 14 occupants of the tourist catamaran sunk on Sunday a mile from the port of Cartagena and who were admitted to the Santa Lucía Hospital have been discharged from hospital on Monday, according to sources from the Regional Ministry of Health and the health centre.

The 14 patients, who were part of the 33 occupants of the boat, were admitted to the Santa Lucía Hospital in Cartagena on Sunday, mainly due to hypothermia, although some of them also had minor bruises and were dizzy.

Maritime Rescue is issuing a radio warning for vessels transiting the area of the sinking of the tourist catamaran Olé in the port of Cartagena to exercise extreme caution for safety reasons, SASEMAR sources reported.

In addition, the vessel ‘Salvamar Mimosa’ is in the area together with the Guardia Civil to ensure maritime safety.

It should be recalled that the incident took place at 16.24 hours, when the Single Emergency Telephone ‘1-1-2’ received a call informing of the incident and that other boats were rescuing the 33 occupants of the stricken vessel.

Maritime Rescue mobilised a Red Cross boat and a helicopter to check if there were any more people on the hull of the vessel or in the vicinity.

The Emergency Medical Services rescued the 33 occupants of the tourist catamaran which sank for unknown reasons.

The occupants were taken to the cruise terminal of the dock, where Civil Protection personnel from the Cartagena City Council assisted them and mobilised ambulances and medical staff from the 061 Emergency and Health Care Services, as there were more people affected by hypothermia and bruising.

The sunken catamaran is very popular in Cartagena. It is the Catamaran Olé, a passenger vessel for 96 people with a pre-established time for its daily routes of three hours, where various kinds of events and celebrations are held. According to its website, the vessel is more than 23 metres long and 10.50 metres wide, which allows it to have an upper deck of more than 200 square metres.

One of its usual itineraries starts in the port of Cartagena in front of the Escala Real, passing by the old Regatta Club, the University of Cartagena, and Navantia to go out to the open sea by the Faro de Navidad, skirting the old coastal batteries in the southern area to reach La Algameca Chica.

The website describes this catamaran “as unique”, as it has been created “tailor-made, from start to finish, to be able to accommodate multiple experiences, which increase in number as time goes by, both in summer and winter”. It is also noted on the website that it has an “experienced crew” and that they have been sailing the Mediterranean for “eight years”.